[Weekender] Cut back on salt

How much sodium do you think is in a bowl of instant ramen? And what would be the total if you had it with kimchi?

Chances are it is more than your body needs for the whole day.

The World Health Organization recommends that adults limit their daily sodium intake to 2,000 milligrams a day, which equals about a teaspoon of table salt.

Now back to ramen.

A bowl of ramen contains 1,700-2,000 milligrams of sodium. If you had it with 100 grams of Kimchi (about 10 pieces) that adds another 1,000 milligrams to your sodium intake. So with this one meal, which is loved by many Koreans for being cheap, convenient and tasty, you surpassed the daily sodium limit.

According to 2010 statistics, an average Korean eats 4,878 milligrams of sodium a day, more than twice the daily recommended amount. 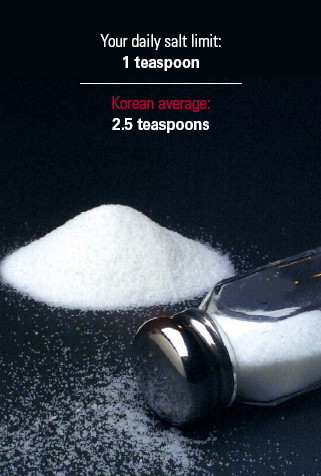 Excessive sodium intake is not confined to the Korean diet. Many countries around the world, including the U.S., are waging a war against salt, the most common source of sodium, proclaiming it a major public health issue.

In fact, excess salt is a major risk factor for cardiovascular disease and increases the risk of stomach cancer, the most common cancer in Korea, killing about 10,000 people here every year.

Recognizing the socio-economic costs of Koreans’ high-sodium diet, the government here launched in 2012 a national campaign against salt.

It set up the Korea Center for Less Sodium Campaign under the auspices of the state-run Korea Food and Drug Administration.

Aiming for a 20 percent reduction by 2020, the center is carrying out various programs targeting individual consumers, as well as teachers, chefs and food industry officials.

The box below contains some tips from the center if you want to cut back on salt in your diet.

● Use a smaller bowl for soup.
- If you reduce the amount of soup you have each meal by just one cup (200 milliliters), your daily intake of sodium is halved.

● When cooking, add salt at the last minute.
- A tiny amount of salt on the surface of food can make it taste salty enough.

● Have enough fresh vegetables, fruits and nuts.
- They are high in potassium and help flush excess sodium out of your body.