They say the country has seen growth in the so-called underground economy despite the Park Geun-hye administration’s efforts to expose it.

Although there is no official data available, a record low return rate of 50,000 won bank notes is one clear indication supporting their argument.

The Bank of Korea printed some 5.3 trillion won worth of 50,000 won bills from January through May, but was able to collect only 1.46 trillion won, recording its lowest collection rate of 27.7 percent. The amount was only about half that of a year ago, according to central bank data. 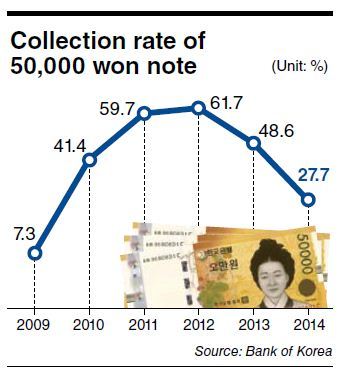 Analysts say this is mostly because people are inclined to hold onto cash in high denominations instead of putting it in the bank, where interest rates are low ― which is the case for many advanced and developing countries, including South Korea.

In addition, some suggest that the government’s efforts to clamp down on tax evasion have, in fact, had a negative effect, causing more people hang onto their cash in order to avoid taxation.

The collection rate for 50,000 won bills had stood at 7.3 percent when the BOK first printed the highest denomination note in 2009. It quickly picked up, hitting its peak at 61.7 percent in 2012, but started to decline last year after the President pledged to slash the underground economy to increase tax revenues.

The 50,000 won bill, which marks its fifth year in circulation next week, already makes up 67 percent of the money in circulation, according to the BOK.

Many people appreciate the convenience of having a higher-denomination bills. Banks, in particular, were able to save significant costs that arose from issuing 100,000 won checks.

Some, however, claim their introduction made it easier to conduct shady financial transactions and accumulate slush funds.

The central bank has remained cautious about whether there is a link between the 50,000 won bill collection rate and the underground economy, despite growing calls to provide relevant data.

Cho Young-moo, a research fellow at LG Economic Research Institute, pointed out that the BOK has been lukewarm about the need to collect data on the 50,000 won bill collection rate.

“The BOK has produced no official data so far, though it has occasionally given out the figures at the media’s request,” he said.

To understand the size of the country’s underground economy, “it is essential to have the data and have a proper understanding of money circulation,” he said, noting that there were no official figures regarding the 50,000 won bills.

“If we let unregulated economic activities grow, the country could fall into a vicious circle, in which low tax revenues bring further tax hikes and strengthen the underground economy,” he added.