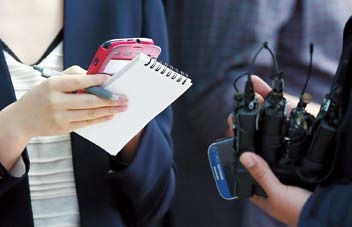 The first step to becoming a reporter in Korea is to pass a written exam and rounds of competitive interviews. The next step entails sleepless nights and stressful days at police stations.

This was the beginning of a long night ahead of me.

Cub reporters must pass the rigorous training program called “mawari” (the Japanese word for “going around”) in order to continue. We eat and sleep at police stations, checking every incident, including those at fire stations and hospitals.

Every two hours or so, we report our findings to our senior reporter. If we are lucky, our report could be a news exclusive. But most of the time, we get yelled at for our incompetence and missing important facts and details.

“Seonbae, there was one woman and a drunk man in their 40s at Jongno Police Station,” I said.

The senior reporter was far from satisfied.

“Why are they there? What is their exact age? What are their charges? I am giving you an hour, find these out,” she hangs up.

The detectives were annoyed to see me again so they shut the door. I had wait until the woman came out to use the restroom. I followed her. When I took a short glance at her, she had bruises under her eyes. Regardless of her situation, I had to ask why she was there. She stared at me and said, “It’s none of your business.”

It was well past 2 a.m. by the time I finished my final report and returned to the police station.

When I opened the door to the reporters’ room, a small room made available to reporters on mawari, a peculiar smell wafted through the air. Blankets were placed all over the floor, piles of clothes were thrown against the corner of the room, and used towels were hanging up against the wall. On the table, there were opened bottles of water, energy drinks and an old bag of potato chips. There were business cards of other cub reporters spread out under a glass covered table. I slipped mine in too.

I climbed up into a bunk bed to sneak in as much sleep as I could, but I had just two hours left before I had to get up. I set five alarms on my cellphone to ward avoid the nightmare of not waking up on time.

During the day, after the morning report, I went to a protest rally, conferences and to a shopping district to track down replica luxury designer jewelry.

When the Sewol ferry capsized, leaving hundreds of people missing and dead, the new reporters were sent to Ansan, Gyeonggi Province and Jindo Island, South Jeolla Province. I was in Ansan for a week, covering the funeral services, watching Danwon High School students return to school, and lighting candles for the victims. But most of all, I cried with them, I reported on them and I remembered the victims in my heart.

Every day I questioned myself, asking, “Why did I decide to become a reporter?”, “Am I fit for this job?” But there were times that helped me to bear through, like the time when a taxi driver gave me a 1,000 won discount, telling me to write good stories for the people.

By the time I started calling stiff-looking detectives “hyungnim” (brother) and standing beside them while they were smoking to talk about their families and joke around, I was freed from my month-long mawari ― a journey I thought would never end. At 5:07 p.m. on a sunny Friday afternoon, I made my final report.

My seonbae told me, “Good work! But I tell you, this is only the beginning.”