[Weekender] Everything is connected

The Web was created in the 1990s following the invention of the ARPANET system in the 1970s through a collaboration between the Pentagon, scientists and businesses that aimed to reduce inefficiency by sharing resources via network connections.

A new market in which all sorts of physical objects ― ranging from home appliances and streetlights to roads and cars ― can be linked with applications via the Internet is being developed a lot quicker than electricity and the Web were.

The concept of the Internet of Things was introduced about a decade ago, when futurists and theorists saw that refrigerators could serve as control towers for connecting other consumer products to the Internet, as refrigerators run all day long and all year round. 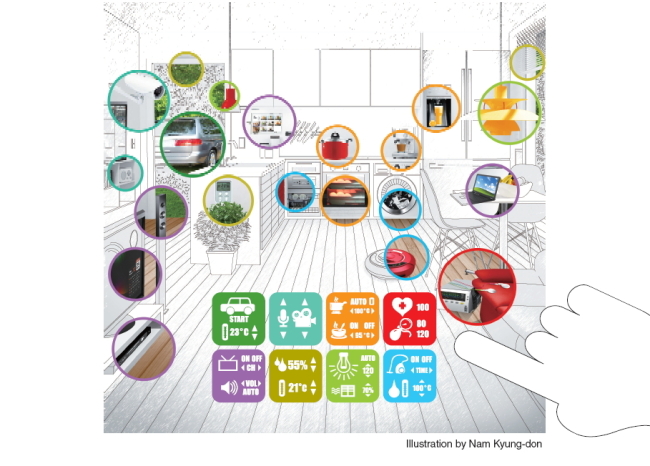 With the advent of smartphones and wireless communication networks, products can potentially connect automatically, allowing the IoT to take shape across all industries, as well as in people’s daily lives, amid an upsurge in data processing capacity.

Fast data processing and sensors in products will play a key role in providing people with customized and efficient services in the coming IoT age.

“Above all, IoT technologies should be developed primarily to help people gain a healthier lifestyle,” said Ronald Ro, a Silicon Valley entrepreneur.

The mobile industry has certainly proved to be a catalyst for the IoT, but the new market can only be fully created through an ecosystem led not by conglomerates but by venture companies, as they have the capability to quickly address problems, find solutions and carry out actions, market observers said.

This is why global IT conglomerates like Google, Apple and Cisco are spending millions to invest in and acquire ventures with smart, connected inventions.

“The Korean unit is in talks with Cisco CEO John Chambers to set up an independent fund for investments in Korean ventures, and small and medium enterprises in the field,” said K.W. Chong, general manager of Cisco Korea.

The IoT would create opportunities worth some $19 trillion by 2020, Chambers said during the 2014 International CES in Las Vegas last January. Korea, meanwhile, is expected to generate 250 trillion won ($244 billion) in value as its infrastructure sector would be the first to adopt the emerging technology, according to Cisco Korea.

The market, simply put, will be huge, and everybody will be better off.

There are concerns, though, that when practically everything becomes connected it could lead to more cases of data theft.

Experts, however, said the positives outweigh the negatives when it comes to embracing the IoT.

“Security is extremely important. But people do not cut themselves off from the Internet out of fear that their data will be stolen,” said Choi Yoon-seok, Oracle Korea’s senior director for IoT and wearable technologies.

“From my perspective, there are more benefits from the IoT than risks. So instead of rejecting the technology, there should be constant efforts to (preemptively) stop hackers.”