[Weekender] The rise of men

HSBC coined the term “Yummy,” which stands for “Young Urban Male,” in its recent consumer report, saying that men were reshaping the retail landscape in the luxury and beauty markets.

The yummy is already becoming a commercial reality in Korea.

According to Shinsegae Department Store, men accounted for some 25 percent of sales of luxury fashion goods at its main store in Seoul last year, up from 13 percent in 2011. 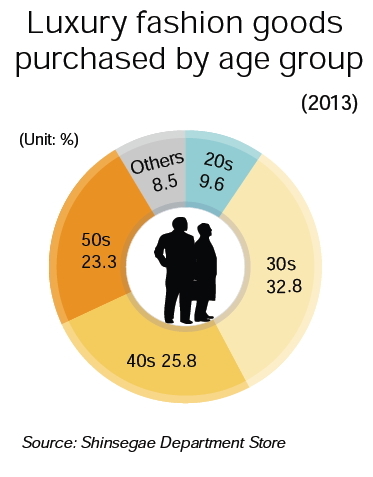 Spending on fashion accessories such as socks and handkerchiefs is also increasing rapidly.

Patterned and colorful socks, in particular, saw a staggering 230 percent gain in 2012, thanks largely to the popular television drama “A Gentleman’s Dignity,” which depicted the lives of four single men, a spokesman of Shinsegae Department Store said.

Korean businesses are taking advantage of the growing number of fashion-conscious men.

The Galleria, one of the poshest department stores in the affluent area of southern Seoul, has expanded its men’s fashion section recently to bring in more high-end brands, such as Italian suit maker Ermenegildo Zegna and French shoe company Berluti. The store has also created a new space dedicated solely to designer sneakers for men.

“Men in their 30s and 40s are increasingly becoming a new consumer power. Those in their 40s, in particular, accounted more than 37 percent of the total goods purchased by men in 2013,” a spokesman of Galleria Department Store said.

Cosmetic surgery procedures, often linked to women, have now reached a wide group of men in Korea. According to BK Plastic Surgery, one of the leading plastic surgery clinics in Gangnam-gu, southern Seoul, the number of men undergoing cosmetic procedures accounted for 11 percent of all surgeries carried out by the clinic in 2013, up from 9 percent in 2011.

The rise of the yummy can be partially attributed to later-in-life marriages since without a family or spouse to support, men can spend their cash on themselves, analysts said.

There have always been cliche terms, from “dandy” to “metrosexual,” for men who dress well and spend a lot of time, effort and money on shopping.

Industry insiders say, however, that the one big difference with the yummy is that they are no longer just the minority group of fashion-savvy men, but prominent consumers.

“Now more men are following their own, unique styles rather than following some big-name brands and trends,” Han Kyung-ae, vice president of Kolon Industries, told The Korea Herald.

“To keep up with evolving customer needs, we’re focusing on producing clothes in diverse colors, styles and designs,” she added.