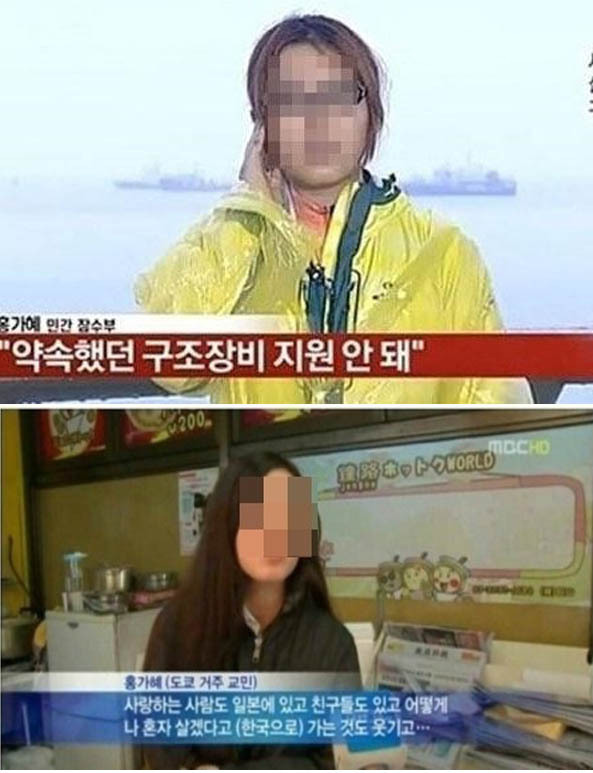 A South Korean woman who made a false claim on a television interview about the delayed rescue operation of the capsized ferry Sewol turned herself in late Sunday, police said.

The South Jeolla Provincial Police Agency on Saturday issued a warrant to detain the 26-year-old woman, surnamed Hong, who claimed that the Coast Guard told civilian divers to “kill time” and that some divers had confirmed survivors inside the sunken ship.

Police said Hong was immediately detained after voluntarily appearing at the police station. Hong reportedly admitted making the remarks based on unverified rumors.

According to local wire Yonhap, Hong was first reached on Thursday through a social network service by a writer from the broadcaster, when she was heading down to Jindo Island, South Jeolla Province.

It is unclear which online service was used by the network to communicate with Hong. But after the accident occurred, Hong wrote posts on her Twitter account, recruiting civilian divers with a diving license.

In the interview, she claimed that the government stopped the divers from entering the waters, and that some civilian divers communicated with survivors inside the vessel.

“Other divers told me that the Coast Guard told them to ‘just kill time.’ Other officials told the families of the missing people that there are no hopes or miracles,” she said, when asked about the situation by an anchor.

Her remarks touched off a firestorm of public criticism, adding to public mistrust against the government and media reports on the state-led rescue efforts.

As already shown in an interview of a victim’s parent on another broadcaster JTBC, families of the victims’ anger has reached its peak over the government’s inconsistent reports on the number of missing passengers, deaths and the slow pace of the salvage operation.

But it was later found in the probe that Hong is not an authorized diver, Yonhap said.

Police said they would continue to question Hong and MBN officials for details, in part to determine who first asked for an interview.

Police also said they plan to request an arrest warrant for Hong on Tuesday morning on charges of libel.

Investigators have pledged to seriously punish those who spread false rumors related to the ferry disaster, including text messages that claimed to be from survivors inside the sunken ship.