They have taken lessons from DIY trailblazer Ikea. The Swedish furniture maker has thrown out the conventional idea of buying ready-made products from a catalogue. Its customers partly assemble their own furniture and arrange it in various ways.

Economists say that buyers of Ikea couches or dining tables increase their affinity with the products after they join in the manufacturing process. The firm also provides its customers with high satisfaction as the products reflect their own tastes and personality.

In a similar vein in Korea, consumer-led goods are offering enterprises inspiration for their product research activities. The business sector is taking advantage of the trend in which “modisumers” modify the goods they buy.

The new consumption pattern can be seen in sectors like food, liquor and cosmetics. The growth of creative products based on customization could bring a chain effect to the overall manufacturing industry.

For the cosmetics market, there are many cases in which a standard product’s color, fragrance and texture do not match with consumers’ needs. So more beauty product users are trying to create their own colors by mixing 2 foundations, or make blushers by mixing a concealer and lipstick.

Spokespeople at some cosmetic brands say that this kind of reinvention could be the best feedback for companies. The industry has frequently been holding events to learn from modisumers’ creativity.

Some women make their own skin care products by purchasing basic ingredients from drugstores.

In the liquor market, young drinkers are actively exchanging cocktail recipes on the Internet. Companies including Pernod Ricard Korea provide consumers with mixology classes as a marketing tool.

“Young people and female customers prefer the mixture of vodka and juice to that of soju and beer,” said Pernod Ricard Korea spokesman Yoo Ho-sung.

“Vodka and rum products with various flavors are fostering a new drinking culture in the local market, heralding market share competition with beer and soju,” he said.

The food industry is a great beneficiary from the customization boom, after instant noodle brands such as Jjapaguri gained popularity after trendy recipes including them as an ingredient were publicized on TV.

Bakery ingredient suppliers are following suit as more and more consumers have become interested in making their own cakes.

Professor Kim Nan-do of Seoul National University forecasts a drastic change in consumption patterns in the coming years. He cited rapid growth in sales of furniture produced by Nordic brands in his latest analysis. 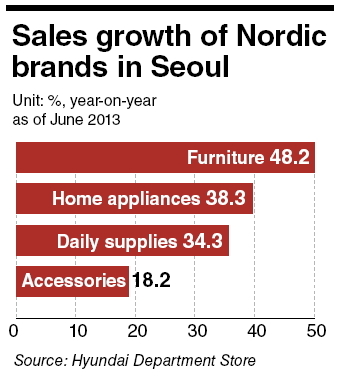 Data from a department store showed that sales of furniture and home appliances from Nordic companies climbed 48.2 percent and 38.3 percent, respectively, in the first half of 2013 on an on-year basis.

Some critics, however, stress that it was hard to determine the extent of the Ikea effect, as it could be partly down to a sudden trend among housewives to prefer goods imported from a particular region.