By Kim Yon-se
Published : Apr 18, 2014 - 21:25       Updated : Apr 23, 2014 - 18:38
Comedian Jeong Hyeong-don recently appeared on the popular TV show “Infinite Challenge,” where he demonstrated how to make “opageti.” The dish was a mixture of ojingeo Jjambbong and Jjapageti ― two types of instant noodles made by Korean food company Nongshim.

After the episode was aired, weekly sales of ojingeo Jjambbong and Jjapageti surged 157 percent and 20 percent, respectively, according to Nongshim.

The underlying reason for the success of opageti, however, is more than just the show’s popularity and Jeong’s appeal; the introduction of a brand new, easy-to-make dish was ultimately what drove people across the country to try it.

“In recent years, the fun element of cooking has been emphasized among consumers,” said Nongshim spokesman Yoon Sang-hak. “Rather than just enjoying the existing recipes, people are copying what others have introduced. Some even upload their own ideas to the Internet.”

Fun and sharing are regarded as the two pillars that hold up the new “modisumer” food trend. 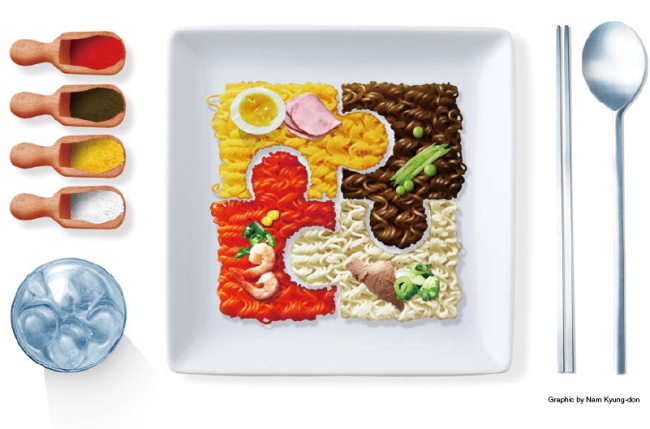 Koreans are no strangers to coming up with novel recipes for stock-manufactured foods. Most Korean men recall the taste of ppogeuri, a popular form of instant noodle enjoyed dominantly by soldiers. While ramen products are usually boiled in pots, ppogeuri is made by cooking the noodles directly in their wrappers for convenience.

In that sense, generations of Korean men have adopted this trend without ever realizing it.

While these involuntary early adopters have opted for different recipes in search of convenience, the new breed of modisumers is motivated by other aspects.

“People are increasingly putting more priority on ‘doing fun activities,’ even when doing something as mundane as using a product,” said Kim Seo-yeong, a coauthor of “Trend Korea,” a book series that analyzes the past year’s issues to predict the trends of the upcoming year.

“What gave birth to modisumers? The pleasure of creating and sharing what you have just made. Creation fills them with self-worth,” she said.

The increasing rate of one-person households has also has accelerated the trend. According to a report by LG Economic Research Institute, people living alone spend more on processed foods than those in larger households.

The surge in instant food consumption, combined with a demand for a new type of dish, ultimately induced more people to become modisumers, she said.

In keeping with the trend, companies are inviting consumers to take more active roles to enjoy their products. Nongshim came up with marketing strategies that simultaneously promote the two products that make up opageti.

Paldo, another processed food maker, opened an official blog to provide various ways to cook its products. It also held events that invited consumers to submit their own twists on cooking Paldo products.

“Even when eating ramen, which is by nature far from individualistic, people want to do it their own way. Some of the new recipes for our ramen completely transcended the original form and transformed into a whole different dish.”

Some stores even go so far as to provide the basic ingredients and let the customers make their own products. A person visiting Dan Hana Cake, a do-it-yourself cake store, is just given basic sponge and a wide range of toppings to choose from.

Customers must labor for about an hour to finish the cake, which strangely seems to be the store’s main appeal.

“In regular stores, the shape and flavor are preset. But in our store, customers can apply their own taste, and have fun making them,” said Park Chan-hyeok, who runs one of the stores near Yeonshinnae Station in Seoul.

Kim Kyung-hun, the director of local think tank Korea Trend Research Institute, said in his recent column that modisumers have left a lasting impact on the country’s food market.

Instead of focusing just on their products, companies are now entrusted with a mission to provide various recipes and ways to essentially make eating a form of entertainment, he said.

Kim said food is rapidly surging as a way to relieve stress and produce joy in everyday life.

“Appetite was once considered the lowest level of pleasure, but it is now becoming a form of entertainment that heals people’s mind and senses,” Kim wrote in a report overviewing last year’s trends. “Food is like a drug for the pain suffered by our soul. It enhances the endorphin level in our lives.”