The company, which has been investing in West End and Broadway musicals such as “The Bodyguard” and “Big Fish,” invested $1 million in “Kinky Boots,” becoming the sixth-largest investor in the production. It was the first time that a musical co-produced by a Korean company received such honors.

“I guess any producer’s dream is to break into Broadway,” said Jee Seung-yeon from CJ E&M. “Investing (in Broadway musicals) was one of the ways to show our ability and capital as producers.” 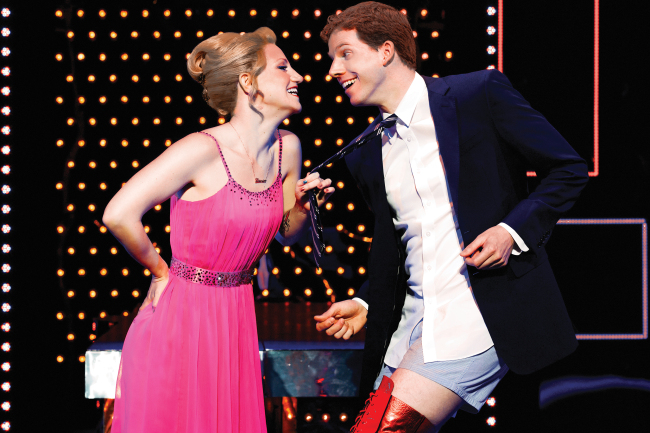 More plays were produced and staged than musicals in both 2011 and 2012, but did not attract more viewers than musical productions.

“You certainly feel like you have a lot of choices compared to five or six years ago,” said an industry source who asked to remain anonymous. “The industry has gotten a lot more diverse.”

Local musicals also saw success at home and abroad. A total of eight Korean musicals, including the romantic comedy “Finding Mr. Destiny,” one of the most popular productions from Seoul’s Daehangno district, and “Caffeine,” were performed in Tokyo’s affluent Roppongi district last year. Another homespun musical, “Moon Embracing the Sun,” which is based on MBC’s enormously successful 2012 period drama series of the same name, also had a Japanese run at the Aoyama Theatre in 2013.

One of the earliest international successes among local musicals was Song Seung-hwan’s nonverbal show, “Nanta,” which premiered in 1997.

The production, which tells the simple story of three Korean chefs preparing for a wedding banquet, became the first Korean theater performance featured at the Edinburgh Festival Fringe in 1999. “Nanta,” still being performed on an open run today, is often cited as one of the early pioneers of hallyu.

“I just felt the local performance arts market was too small,” Song told The Korea Herald. “You produce a show and perform in Seoul, Gwangju, Busan, and that’s pretty much it. I thought I needed to break into the international market if Korea could not get at least three times bigger in size.”

One of the local producers who is thinking the same way is Eom Hong-hyun, the CEO of Korea’s EMK Musical Company. In February, he announced that he will produce a local musical targeting a wider audience in China, Japan, Broadway and the West End. The upcoming production isn’t non-verbal, and it’s not even about Korea. It deals with the dramatic life of Mata Hari, a Dutch exotic dancer who was convicted of spying for Germany during World War I and executed in France.

“This will be an opportunity for capable Korean actors and actresses, as well as Korean staff members, to stage a show overseas,” said Eom in an email interview with The Korea Herald. “Mata Hari is considered one of the greatest female spies in world history, as well as an iconic femme fatale. I thought her story would resonate with a global audience.”

This isn’t Eom’s first time trying something new. EMK is best known for successfully introducing Korean audiences to German-language musicals, which were virtually unknown here. Their Korean renditions, including “Elisabeth” and “Rebecca,” were altered to cater to local tastes, except for the music and scripts.

For example, Tod, the spirit of death who seduces the unhappy empress in “Elisabeth,” was in fact asexual in the original European production. In the Korean rendition, the character appears as a charismatic, elusive male. The role brought K-pop singer Kim Jun-su, a member of JYJ, musical stardom.

“In the original production, Tod is either male or female,” said Lee Bo-eun from EMK. “In some scenes, he would appear in skirts. He had long, blond hair. But we thought having Tod as a male character would indulge local musical fans better.”

Just like the Korean productions of the European shows, “Mata Hari” will also have an all-Korean cast. But just as the European production were altered for the local audience here, the Korean actors will deliver the show in foreign languages for the upcoming world tour. EMK said they will support the actors and actresses with their language classes.

Meanwhile, some 50 percent of the staff members will be foreigners with experience in overseas performing arts industries. It was American composer Frank Wildhorn, who visited Korea in 2011 for the Seoul run of his musical “The Count of Monte Cristo,” who suggested Eom produce a show about Mata Hari.

One of the problems facing the local musical industry is the lack of capable actors.

“There are more venues for the musicals, and more musicals are being produced, that’s for sure,” a source, who has been in the industry for about five years, said on condition of anonymity. “And one of the problems that people often encounter is that there just aren’t enough actors. Not just actors, but ‘good’ actors.”

She pointed out that many capable musical actors, once they make a name for themselves in the performing arts scene, often leave the stage for films and TV. That just leaves stage producers with fewer options, she said.

Popular TV and film actors, such as Joo Won (“Good Doctor”), Oh Man-seok (“The Prime Minister and I”), Kim Moo-yeol (“Eungyo”), Jo Jung-suk (“Architecture 101”) and Shin Sung-rok (“My Love from the Star”), started their careers as stage actors.

“Entertainment agencies very often look for their actors in the performing arts scene, because they can act and sing to begin with,” she said. “That makes them more competitive than those who aspire to get into the film or TV industry right away.”

Meanwhile, local director Sung Jae-jun, whose previous works include musicals “Singles” and “Caffeine,” said there need to be more workshop opportunities for local artists here. His latest musical, “Full House,” which is opening in April, went through a workshop at Daegu International Musical Festival back in 2010, where it won the top Korean musical award.

“I would like to see more homegrown musicals in the industry,” he told The Korea Herald.

“And in order for that to happen, there should be more workshop opportunities for local productions while they are still at their developmental stages. When you just have your music and your script, you don’t know if it is good enough or not. You need to have the opportunity to showcase the work to an audience before your first run in a theater opens. That’s the way to get works that are original and even experimental. Of course, tickets have to sell, but you don’t know what the public likes until you make something first and show it to them.”