The easternmost islets were the first Korean territory colonized by Japan, and in Koreans’ view, Tokyo’s continued claim to them epitomizes its unrepentance for its wartime wrongdoings

By Shin Hyon-hee
Published : Jan 17, 2014 - 21:20       Updated : Jan 17, 2014 - 22:52
In A.D. 512, Gen. Kim Isabu was on a mission to conquer an island country off the east coast of the peninsula. To defeat the tribesmen, who were notoriously ferocious and aggressive, the shrewd commander used a trick. He erected wooden figures of fire-breathing lions on his vessels and threatened to let the prides loose unless they surrendered. The frightened islanders finally succumbed and became subjects of Kim’s Silla Kingdom.

The episode, featured in the “Samguksagi” (“The History of the Three Kingdoms”), a book from A.D. 1145 on ancient Korean history, is the first written record of Dokdo. It is also one of a slew of historical references the nation uses in its ownership rows with Japan over the easternmost islets.

Located roughly  both countries’ mainland and deeply interwoven in their bitter shared history, Dokdo has been a diplomatic flashpoint between the two neighbors for decades. 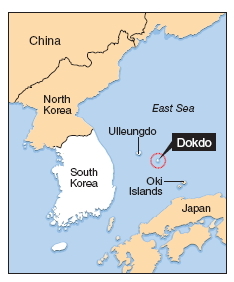 Japan has ratcheted up its sovereignty claim through official documents, school textbooks and most recently a 90-second video in 11 languages released on YouTube.

Korea counters that the islets are an integral part of its territory historically, geographically and under international law. It does not acknowledge the existence of any territorial dispute subject to diplomatic negotiations and judicial settlement.

Seoul points to historical records showing that the islets were annexed in A.D. 930 by Silla’s successor, Goryeo, and that a succession of Japanese governments recognized Korea’s control of the set of tiny outcroppings, which are called Takeshima by the archipelago country.

Throughout history, the islets were frequently violated by Japanese fishermen and invaded by Japanese pirates. These incursions often resulted in major armed conflicts in the medieval period.

In 1905, Japan covertly incorporated Dokdo as a military post during its war against Russia before it colonized the entire Korean Peninsula in 1910. The islets were returned to Seoul upon its liberation following Japan’s defeat in World War II.

Thus for Koreans, Dokdo was the first part of their territory to fall victim to Japanese colonial rule. Tokyo’s continued claim to them epitomizes that it has yet to repent for its wartime wrongdoings.

“To the people of Korea, Dokdo is not simply a matter of a small outcrop of rocks off its coast, but a symbol of being deprived of their independence and sovereignty for 35 long and painful years,” Shin Yong-ha, president of the Dokdo Institute, an independent research group, wrote in his book, “Korea’s Territorial Rights to Dokdo.”

For many Ulleungdo residents, Dokdo is their bread and butter, as it was for some Japanese fishermen.

The surrounding waters, where cool and warm currents meet, form a habitat for migratory fish such as salmon, trout, codfish, Alaskan pollock, pacific saury and sharks. In the winter squid season, the lights of fishing boats dot the ocean every night. The volume of catch in this area typically determines the price of seafood in the local market.

“When we were out to sea in the past, we often bumped into Japanese fishing boats,” said Kim Seong-do, who has been living on and around Dokdo for the past four decades.

“But it’s outrageous for them to say that Dokdo is their land. … It unnerves me to hear them making the argument so easily.”

The 74-old-fisherman and his wife Kim Sin-yeol are the two sole civilian residents. Sharing the residence with them is a small group of coast guards.

“Since we rotate on a 50-day cycle, we only do training for 50 days on Ulleungdo before being evaluated and dispatched to Dokdo,” Chang Il-young, chief of the Ulleungdo Dokdo Coast Guard, told The Korea Herald.

“Assuming there is a contingency on Dokdo, we basically practice martial arts, rappelling and swimming, and run other drills involving training guns and boats.”
Territorial tension has become more acute as both countries’ leaders attempt to use sovereignty claims and other populist policy issues as a political weapon.

The bilateral relationship suffered one of the biggest diplomatic crises in years in 2005 when Japan’s Shimane Prefecture assembly set Feb. 22 as Takeshima Day to highlight the decades-long assertion.

The move added to Japanese Prime Minister Koizumi Junichiro’s repeated trips to the controversial Yasukuni Shrine, his administration’s stipulation of Dokdo as its territory in diplomatic and defense papers, its endorsement of school textbooks whitewashing the country’s imperial past.

The chain of moves prompted then-President Roh Moo-hyun to deliver a special address, calling Tokyo’s claim “an act of negating the complete liberation and independence of Korea.”

Despite a brief letup, the ties sank to a new low after Roh’s successor Lee Myung-bak became the first Korean leader to visit Dokdo in August 2012. Then-Japanese Prime Minister Yoshihiko Noda renewed the country’s 1954 demand that the case be taken to the International Court of Justice before the U.N. General Assembly, which Seoul dismissed.

Today the dynamics surrounding the relationship are apparently growing ever more complex and multi-faceted, with Japanese Premier Shinzo Abe further stepping up the ownership argument through alongside other hawkish foreign and defense policies.

The nationalist commander-in-chief sent a vice minister-level official to the regional Takeshima Day event for the first time in February 2013. His administration installed a new office responsible for territorial sovereignty issues within the Cabinet Secretariat last year, while pushing to revise guidelines for middle and high school textbooks to describe Dokdo as Japan’s territory.

Tokyo secured 1 billion yen ($9.5 million) for territorial issue-related expenses this year, up a staggering 20 percent from a year ago. That is more than twice Seoul’s budget of 4.8 billion won ($4.5 million).

With Abe’s rightward drift unnerving neighbors, the presidents of Korea and China, Park Geun-hye and Xi Jinping, have shied away from a summit with Abe.

As they wage heated advertising campaigns, Seoul and Tokyo recently traded barbs over each other’s releases of video clips asserting their claims to Dokdo.

In its 90-second clip, Japan reiterated in nine different languages that Korea “illegally occupies” Dokdo in breach of international law. Seoul demanded that the clip be removed immediately, calling it an “anachronistic provocation.”

The increasingly bitter diplomatic row is fueling concerns that the relations may enter a vicious circle in which diplomatic brawls kindle popular anger and then spill over to eclipse economic cooperation and cultural exchanges with Japan, and derail multilateral strategic cooperation to end North Korea’s nuclear program. Experts have called on both sides to focus on basic values and work together for a more constructive partnership.

“In Japan there are not many who think the way the Abe administration does ― it merely speaks for those on the right,” said Yuji Hosaka, director of the Dokdo Research Institute at Sejong University in Seoul.

“The two countries should expand people-to-people exchanges and keep alive ministerial-level dialogue so they can resolve practical matters. Korea, meanwhile, needs to continue to consult with the U.S. and Japan, separately or altogether, to prevent its interests from being damaged by any Japanese initiative.”


Dokdo at a glance