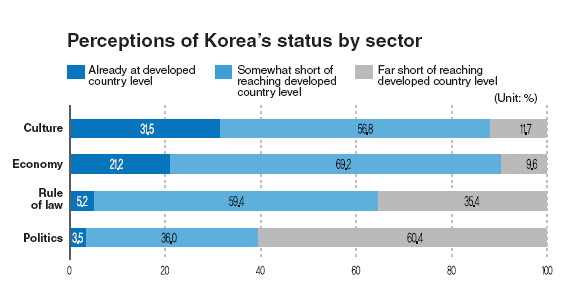 Koreans take great pride in their culture, especially their pop culture, thanks to the K-pop boom, and think that the level of culture is way above the level of their economy, a government survey showed Wednesday.

In the “mindset and values of Koreans 2013” survey by the Ministry of Culture, Sports and Tourism, involving 2,537 people aged between 19 and 79, the respondents showed pride in cultural heritage (93.1 percent); the traditional costume hanbok and Korean food (92.7 percent); Confucian values, including loyalty and respect for the elderly (85.9 percent); and pop culture, including K-pop (81.5 percent).

“The recent string of Korean cultural heritage (sites and traditions) being successfully added to UNESCO heritage lists, and the stories of the worldwide popularity of K-pop have brought about this perception,” said Kim Dae-kyun, a ministry official.

Koreans reported a happiness level of 6.9 out of 10. The more family members they had, including a spouse, the happier they felt. They counted health the most important factor for happiness, followed by spouse, children, assets, work life and friends.

In choosing a spouse, both men and women considered personality the most important factor. However, men put a greater weight on women’s appearance (38.5 percent), while women valued men’s occupation or wealth more.

About 53.4 percent thought Korea is a gender-equal society, which is about 23 percentage points higher than the 2008 result of 30.4 percent. Men (57.2 percent) were more likely to think so than women (49.5 percent). About 52 percent said they would prefer to enjoy their life as it is now rather than prepare excessively for the future, and about 45.5 percent thought people could move up the social ladder if they wanted to.

Showing consideration for others was the most commonly perceived condition for making Korea a better place to live, followed by equal opportunities for everyone, respect for the elderly and communication among people.

“All respondents said that today’s teenagers lack consideration for others. Even amid the intense disputes over political, economic and social issues, people are finding common values in the need to yield a little to others,” Kim said.