In a major effort to overcome its prolonged financial crisis, the nation’s 17th-largest conglomerate Dongbu Group bit the bullet and decided to sell off several of its core assets.

But its self-rescue plan, though considered the only plan to save its symbolic steel business, is also a double-edged sword as it involves the disposal of the group’s key growth engines, including some of its steel manufacturing facilities.

On Sunday, Dongbu Group announced it would sell off Dongbu HiTek, a highly profitable specialist in the semiconductor market, along with Dongbu Metal and the Incheon Steel Mill of Dongbu Steel.

Additionally, chairman Kim Jun-ki even pledged to sell his personal assets of 100 billion won ($9.5 million) and use the cash to raise capital for Dongbu Steel. 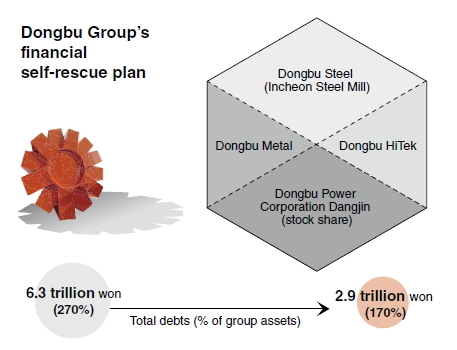 To Kim, this was not only a matter of financial loss, but also the renunciation of his long-time aspirations for the chip-making business.

Refusing to settle with the conventional construction and steelmaking sectors, the chairman in 1997 established Dongbu Electronics, the former body of Dongbu HiTek.

In 2002, he also acquired Anam Semiconductor. It was 50 times bigger than Dongbu at the time, but the electronics business for long after remained a financial burden on the group.

After years of seemingly futile investment, it was this year that Dongbu’s semiconductor business at last rose into the black.

The conglomerate sell-off plan is thus expected to demonstrate its sincerity for financial rehabilitation and have a positive effect on its refinancing blueprint, according to officials.

“We have high hopes that the government will approve of our request for additional funding,” said an official of Dongbu Steel.

The group earlier asked the government for 89 billion won, which is 80 percent of the corporate bonds slated to mature next month.

Despite the optimism over its financing, however, the steel company will still be forced to scale down its business and scrap its current initiative in the market.

The group’s rescue plan includes the sale of the 700 billion won Incheon Steel Mill, which had made some 80 billion won in operating profit last year.

It was, in fact, precisely for this high profitability that the group painstakingly decided to sell off the Incheon plant and secure liquidity, according to officials.

But as the facility specializes in the production of cold-rolled steel, used to make colored steel plates for construction and home appliances, the disposal will mark their exit from the high-profit sector.

Dongbu Steel, which recorded a third-quarter operating deficit of 15.1 billion won, earlier said that the cold-rolled steel sector would play a key role in supporting the company in the coming years.

The conglomerate will step out of the ferroalloy industry as well, as its metal-making affiliate Dongbu Metal is included in the sell-off package.

“The financial rescue plan was a strict necessity amid an all-or-nothing situation, but it also caused concerns over the group’s future growth with the elimination of several of its highest-potential businesses,” said a Dongbu Group official.