The Samsung Lions are the champions of South Korean baseball for the third straight year. 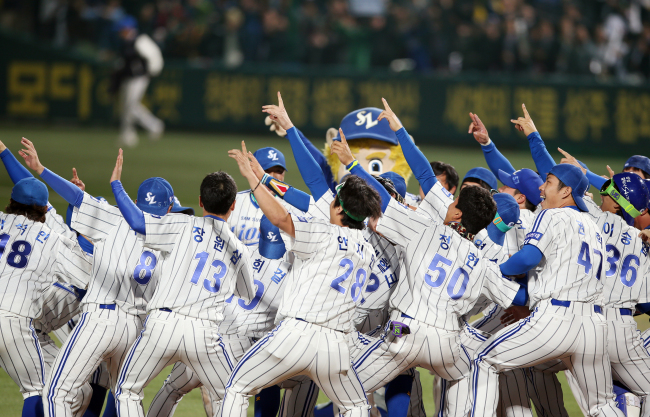 At their home Daegu Stadium, about 300 kilometers southeast of Seoul, the Lions blew the game wide open with a five-run sixth inning, as they became the first club to win the pennant and the Korean Series in three straight years.

They are also the first team to win the Korean Series after trailing three games to one.

It marked the seventh time that the Korean Series winner was decided in a Game 7.

The Lions broke the 2-2 tie in the bottom of the sixth thanks to a throwing error by Doosan third baseman Lee Won-seok. With one out and bases loaded, Choi Hyung-woo hit a soft grounder to Lee, whose throw home went off the right hand of the runner Jeong Byeong-gon.

Jeong put his hands up as he slid feet first into the home plate, and the ball was deflected toward the first base dugout, allowing Park Han-yi to score from second base.

Park Seok-min, the next batter, blooped a two-run single to center off Doosan's reliever Derek Hankins for a 6-2 lead. Kim Tae-wan then drove Park home with a double to left-center field, chasing Hankins from the game.

Son Si-heon hit a solo home run for the Bears in the top seventh, but they couldn't get any closer in the decisive game.

Reliever Ahn Ji-man was credited with the victory despite giving up a run in his one inning of work. Hankins, a starter-turned-reliever, had pitched 11 1/3 scoreless innings in this year's postseason before the bottom fell out in the fatal sixth inning. He was the losing pitcher after giving up five runs, three of them unearned, on five hits and a walk in 1 1/3 innings.

The 2-3-4 hitters for the Lions, Park Han-yi, Chae Tae-in and Choi Hyung-woo, reached the base 10 times in 15 plate appearances.

Park went 3-for-5 and scored three runs, while Chae also had three hits. Choi drew three walks and scored once.

For Doosan, Kim Hyun-soo went 4-for-4, all of them singles, in the losing cause.

The Lions scored seven runs total in the first four games, but put up 20 runs on board in their final three games, all of them victories.

Neither of the starters, Jang Won-sam for Samsung and Yu Hui-kwan for Doosan, factored into a decision in this game. Jang was the steadier of the two, throwing 5 2/3 innings and giving up two runs, one of them unearned on six hits. He struck out six and

walked one. Yu needed 100 pitches to get through his 4 1/3 innings. He allowed two earned runs on six hits and five walks. He managed to strike out just one.

The teams traded a run apiece in the opening inning. Lee Jong-wook led off the game for the Bears with a double in the top first, and after Son Si-heon sacrificed him over to third, Kim Hyun-soo drove in Lee with a single the right side of a drawn-in infield.

The Lions answered in the bottom of the first, when Park Seok-min hit a sacrifice fly to left with one out and bases loaded.

The Bears reclaimed the lead in the top third. They too had the bases full with one out, and Yang Eui-ji hit a sacrifice fly that made it 2-1.

After blowing earlier opportunities to put some runs on board against the shaky starter Yu, the Lions finally pulled even in the fifth.

They opened the inning with back-to-back singles and a walk, Yu's fifth of the night. The left-hander left the game after retiring Park Seok-min to a shallow fly to left.

Then facing new pitcher Hankins, Lee Seung-yeop, 3-for-24 in the Korean Series up to that point, delivered a game-tying single to right. It was Lee's first RBI of the series.

The Lions loaded the bases in the first, third, fifth and sixth, and finally broke out in the chaotic sixth inning.

Samsung's closer Oh Seung-hwan made what might have been his last appearance in the Lions' uniform. In a non-save situation, the right-hander threw a perfect ninth inning.

The free-agent-to-be this offseason is expected to be posted by the Lions for any interested Major League Baseball club. He has reportedly drawn interest from the New York Yankees.