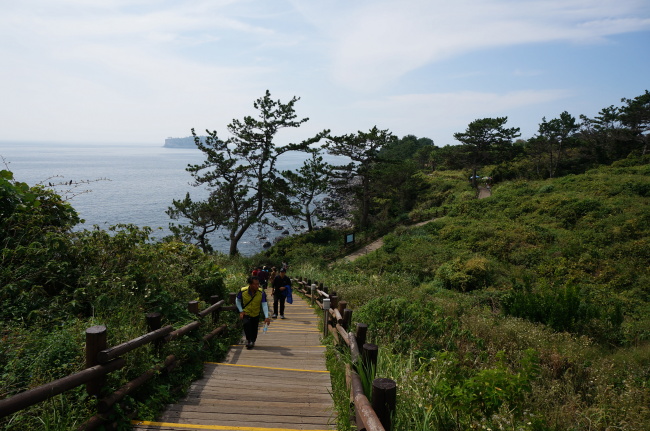 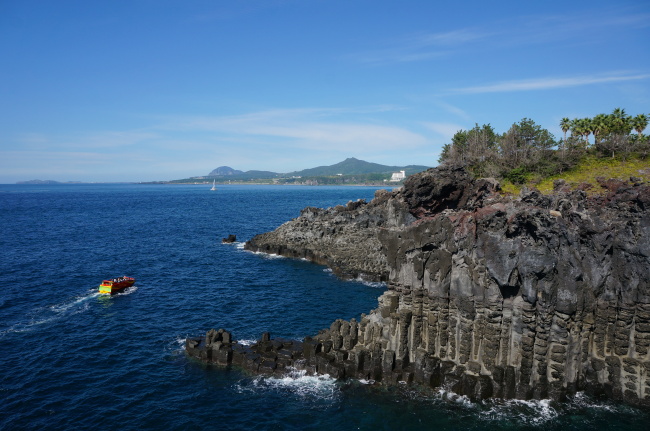 Walk along the coast to discover Jeju’s beauty

Jeju Olle trail is the first walking trail in Korea, developed and built by journalist-turned-walking enthusiast Seo Myeong-suk. The opening of the first trail in 2007 trigged a nationwide walking boom, inspiring other provinces to create their own trails, even borrowing the name “Olle,” a word in the local Jeju dialect meaning a narrow alley leading from a house to a main street.

Since Seo Myeong-suk started designing and developing some of the beautiful, hidden trails on Jejudo Island in 2007, Jeju Olle now has a total of 21 trails that follow the island’s beautiful coastline, going up and down small volcanic hills and taking hikers through local villages.

The trails are well built, clean and easy to walk as they are under constant care by the Jeju government and trail caretakers.

Of the many trails, courses 7 and 8 are among the trails most frequently visited by tourists and novice walkers. They are well-known for having diverse features of the beautiful Jejudo Island landscape that range from towering cliffs, rocky shores and sandy beaches to small ports and local residents’ front doors.

“Course 7 has the reputation of being the prettiest path of the Olle trails. It is the trail least paved with asphalt or cement. The scenes looking on the cliffs are just breathtaking,” said Kim Mi-sun, voluntary caretaker of trail 7 who runs a small café at the start of the trail.

Each course has a caretaker, who maintains the trail by making sure ribbons indicating directions are tied, assisting visitors with directions and cleaning. The ribbons and signs prevent walkers from getting lost along the course.

Course 7 starts at a narrow seaside trail that overlooks Oedolgae Rock. The site attracts hundreds of tourists as it was featured in the popular 2003 TV series “Daejangguem.” A big picture of actress Lee Young-ae, who played the main role in the drama, is placed on the trail, serving as a photo spot for tourists.

Course 7’s pristine nature starts to give way to signs of human activity in Gangjeong. The once-small scenic village has now turned into the stage for demonstrations against the construction of a new naval base there.

The long-standing dispute, which emerged as a hot political issue last year, has not receded yet as religious groups, progressive political parties and NGO activists still hold sit-ins near the construction site.

Although the naval base is nearing partial completion, yellow flags, a sign of protest, hang on houses in the village.

Kang Chung-sea, a photographer who has been capturing scenes of Jeju Olle walking trail, explained that the protest has to do with the Jejudo Island natives’ insular character that resists outside influence.

“You can guess from the slang they use for talking about people from the mainland with a lowly and inferior connotation. By nature, they oppose the forces coming from the mainland, including the central Korean government’s decision to build the naval base,” said Kang.

The people of Jeju may still harbor the psychological trauma of watching their neighbors and family members being killed in the April 3, 1948, massacre, which sought to suppress an uprising by Jeju-based progressive activists against the central government.

Course 8 is one of the longest courses on Jeju Olle trail, stretching 19.2 kilometers along the southern coast. But it’s an easily accessible route because it goes through the Jungmun Tourism Complex, a cluster of popular hotels and resorts. The course shares some parts of its path with the hotel promenades at Hyatt Regency Jeju and The Shilla Jeju.

Course 8 offers a stretch of rough, rocky beaches, offering the most pristine sea view of Jejudo Island. The best sea view can be seen at Jusangjeoli cliff, one of the most famous tourist sites. The cliff has a unique volcanic rock formation with rock pillars shaped like cubes or hexagons.

To get a glimpse of the diverse Jeju landscapes, a stop at the photo stand at the entrance of Jusangjeoli cliff, run by local photographer Koh Seung-chan, is recommended. He displays and sells his breathtakingly impressive works in prints and postcards featuring Jeju’s diverse landscape.

According to Koh, some pictures like Hallasan Mountain with snow on the peak and yellow canola flowers in a field under a clear blue sky were moments that come only once every few years.

The path called “The Marine Corps Trail” from Hyatt Regency Jeju to Nonjitmul is notorious as one is required to hike the rocky 2-km shore. But the trail is currently closed after a severe typhoon a couple years ago destroyed the path built by the Marine Corps.

It has been substituted by a 6.3-km trail that circles the eco-village Yerae-dong.

Course 8 includes a natural spring swimming pool, which is one of the unique geological features of the island, at Nonjitmul. The freshwater swimming pool, located just above the seashore, is a result of the spring water rising to the ground surface from rainfall.

“It’s really nice to take a dip while walking on the Olle trail in summer,” said Kang.

Jeju Olle walking trail courses 7 and 8 can be reached by airport limousine bus 600 from Jeju International Airport. Restaurants, small supermarkets and restrooms are seen along the streets.