[Voice] Should agriculture be subsidized?

By Korea Herald
Published : Oct 28, 2013 - 19:45       Updated : Oct 28, 2013 - 19:46
Like the country itself, Korea’s farming sector transformed completely in a matter of decades. But unlike so many other industries, agriculture’s trajectory in the face of industrialization has been characterized by decline. From contributing 27 percent of gross domestic product in 1970, agriculture was responsible for less than 3 percent of economic activity in 2010. The farming population similarly plummeted from about 14 million people to fewer than 3 million over the same period.

As in other developed countries, local agriculture has long been heavily dependent on government support to compete with cheaper imports from abroad and transition to modern farming practices.

But while subsidies have come down in recent decades alongside economic liberalization, international bodies such as the World Trade Organization and the Organization for Economic Cooperation and Development have called for more to be done.

In a report last month, the OECD said that numerous countries including South Korea had seen their subsidy levels rise in 2012, in spite of a long-term trend of average decline across the bloc. Korea was also identified as having some of the highest subsidy levels, with government support accounting for 54 percent of farmers’ income. Only Norway, Switzerland and Japan had higher subsidy levels among OECD members.

“Even though Korea has made some progress toward more market-oriented agricultural policies with reduction in the producer support over the last 20 years, the level of support remains relatively high ― 2.5 times higher than the OECD average ― and the potentially most production- and trade-distorting forms of support remain around 90 percent of total support,” Jeong Hyun-chul, a policy analyst at the OECD’s Policies in Trade and Agriculture Division, told The Korea Herald in an email interview.

“And although the share of support through budgetary payment schemes has gradually increased in recent years, market price support still dominates in producer support. Another point is that the most producer support is commodity-specific and concentrates on a small number of products, including rice. In the long run, it will hurt the efficiency of the market and may not contribute to improving the quality of (a) farmer’s life.”

Market price support refers to the amount of funds transferred from consumers and taxpayers to agricultural producers as a result of measures to keep prices above the market rate.

Calling for reform, the OECD report said that subsidies resulted in higher taxes and higher prices of goods. A separate WTO review of Korean agricultural policy from 2004-2006 found that agricultural commodity prices averaged two and a half times global levels.

For many economists, the question simply comes down to the realities of the marketplace. Chung Hoe-sang, a research fellow at the Korea Economic Research Institute, said that agriculture should have to stand on its own just like any other industry.

“Farm subsidies should be cut and eventually eliminated. If an industry cannot survive without government support, this means that the industry is not competitive,” said Chung by email. “If we want to pursue economic prosperity, we need to allow a market process to work, where noncompetitive industry is driven out of markets. The same holds true for the agriculture industry.”

Yet among those who follow the sector are many who see agriculture as being apart from other types of industry. As a way of life, it cannot be seen in purely economic terms.

“Many people think the agricultural sector is inefficient compared to other industries. But the specialized agricultural economists do not think about that. We cannot say which industry is inferior or superior to others,” said Park Seong-jae, research director at the Department of Agricultural Development Research at the Korea Rural Economic Institute.

Park also challenged the contention that Korean agriculture received an undue amount of government support. He noted that while producer support was high by international standards, direct payments to farmers themselves were modest compared to other developed countries.

“In the U.S.A., the government directly supports farmers’ (income) level as well as the price level. The U.S. operates a target price level, and they provide farm loans or direct payment or something like that. So the support level is very high in the EU or the U.S., but in Korea it is very low. That condition was fixed around 1986-89 (at the Uruguay round of multilateral negotiations in the context of the General Agreement on Tariffs and Trade, the precursor to the WTO).”

“The current situation is very, very bad, maybe the worst in history,” said Park. “Many farmers are very old. The aging problem is general over the world, but the Korean situation is much worse, I think. So they don’t have any power to cultivate their farmland. The social welfare for them is very weak compared to other sectors.”

Arguments for robust government support go beyond the welfare of the farmers themselves. In the eyes of many trade liberalization critics, a strong agricultural sector is synonymous with self-sufficiency and hence greater food security.

“Food is not a commodity like Samsung cell phones and shouldn’t be treated as such. We all depend upon food for our survival; you can’t grow food from a computer or a factory. We need farmers with the hard-earned skill and generational knowledge to grow food in a way that is healthy for humans and the environment,” Christine Ahn, a policy analyst with the Los Angeles-based Korea Policy Institute, said by email. “Korea in the 1970s achieved approximately 70 percent food self-sufficiency in grains; today it is only 20 percent. This is very dangerous as all nations witnessed in the last financial crisis when prices skyrocketed, which led to riots in over 15 countries.”

Ahn, who believes the government should support food sovereignty movements “standing in opposition to the global corporate-controlled free trade agenda,” claimed that much of the supposed inefficiency of Korean farming was a result of deliberate policy choices at home and abroad.

“There have been systematic policies ― national and international ― that have sacrificed South Korean farmers for rapid industrialization. Take for example (the) U.S. food aid for over two decades that essentially dumped cheap U.S. surplus commodities such as wheat and depressed prices that South Korean farmers could reap, not just of wheat itself but other grains such as barley,” she said. “In the early 1970s when the U.S. began charging for its food surplus exports to overcome its monetary crisis, South Korea under Park Chung-hee launched the Saemaul Movement which forced farmers into the green revolution project of replacing lower-yielding indigenous varieties that were pest-resistant with high-yielding green revolution seeds which made farmers highly dependent upon agricultural chemicals and fertilizers.”

But if Korea is to continue liberalizing agriculture while at the same time propping up the sector like other developed countries to varying degrees, some are better middle-path approaches than others, according to economists Jean-Christophe Bureau and John Christopher Beghin, authors of the 2003 paper “The Cost of Food Self-Sufficiency and Agricultural Protection in South Korea.”

“If Korea considers that maintaining a local production of rice is desirable for noneconomic objectives, it should focus on the way to do it with minimal economic distortions,” said Bureau, a professor at AgroParisTech, Paris Institute of Technology, by email. “In a research (project) we did a few years ago, we showed that the policy of self-sufficiency in rice was very costly for Korean consumers, but did not create considerable economic inefficiencies. That is, high border taxes for rice resulted mostly in transfers of money from consumers to producers, but that the economic costs in terms of a bad allocation of resources were limited.”

His co-author Beghin, a professor at Iowa State University, said that the current approach was less desirable than other ways of supporting the industry.

“The Korean agricultural policy system taxes consumers/users of the protected commodities and subsidizes producers by raising prices by closing borders. This is the worst way to subsidize agriculture as consumers are taxed as well,” said Beghin by email. “It would be better to give production subsidies or even better to write welfare check to rice producers and let the price go down to the border price level. Poor consumers would benefit tremendously and other distortions associated with the closed borders would be mitigated.”

The issue of subsidizing agriculture needs to be considered in the context of the era, the needs and wants of the nation, and overall food security. South Korea is a small country with some arable land. If South Korea got rid of all agricultural subsidies, then most of the farms here would disappear. Sure, your average person would pay less in taxes and overall food prices would drop, but the nation would lose a lot of food security. Yeah, you can get a lot of food cheaper from Bangladesh or Mozambique, but what happens when those countries have droughts, floods, infestations and policy changes? The nation’s food companies will be short-handed until they can find another seller, assuming one is available that has the right product (i.e. kimchi cabbage).

Also, what happens to the farmers when they can’t compete with the U.S./Canada (economies of scale) or the Third World (labor costs)? The unemployed will move into the larger towns and cities -- are those cities going to have jobs for them?

Haiti removed its rice subsidies in the early ‘90s and it paid for it in other ways.

I am writing in regards to the opinion piece published in The Korea Herald on Dec. 10, 2012. I was surprised that the rate of homelessness has grown steadily in recent years. I did know there are so many people without homes, but I could not expect as many as 4,921 people nationwide were classified as homeless in 2012. It is my opinion, however, that the government need not help these people.

First of all, only hard work and effort allows people to reap the benefits of their position. The homeless never seem to make any effort. They have chosen this lifestyle. The homeless should have privileges of their own position. Second, good citizens (law-abiding citizens) are negatively affected by the homeless. They beg for coins, drink with the money, and sprawl out in the streets. In other words, the homeless prevent citizens from using public property. All citizens are valuable. We should support good citizens, too. No one should take responsibility for the homeless. They must take care of themselves. If we consider helping the homeless, then we are penalizing ourselves for doing nothing wrong. 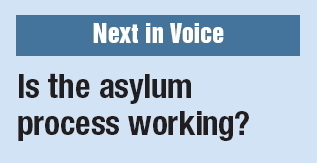