No regrets leaving would be a lie: Ex-Wonder Girl Sunmi

Ahead of her comeback as a solo artist, Sunmi, a former member of Wonder Girls, confessed that she had to leave the girl group after seeing herself appear on the stage mechanically, with no heart and soul.

Sunmi withdrew from the five-member band in February 2010 after the Wonder Girls finished touring 50 cities in the U.S. to promote their music. The fans were shocked by her sudden dropout and raised countless speculations behind the decision.

She said the busy schedule and losing appreciation for life were the reasons she decided to take a break from her career.

“I was so accustomed to receiving love while being in Wonder Girls. You’re supposed to be happy in front of the public, but I lost my original intentions,” she said.

“I didn‘t think I was humble at that time. I needed time to self-reflect.”

During her hiatus, the 21-year-old singer enjoyed the life of an ordinary college student as she entered Dongguk University’s theater and film department in 2010, and realized how much she loved the stage.

“It would be a lie if I said there were no regrets after I withdrew from Wonder Girls. But I tried to remember that I have many chances in the future to show myself as a singer,” she said

Sunmi voluntarily restarted her music career from the bottom as a trainee at her former group’s agency, JYP Entertainment, receiving vocal and dance lessons to refine her skills. 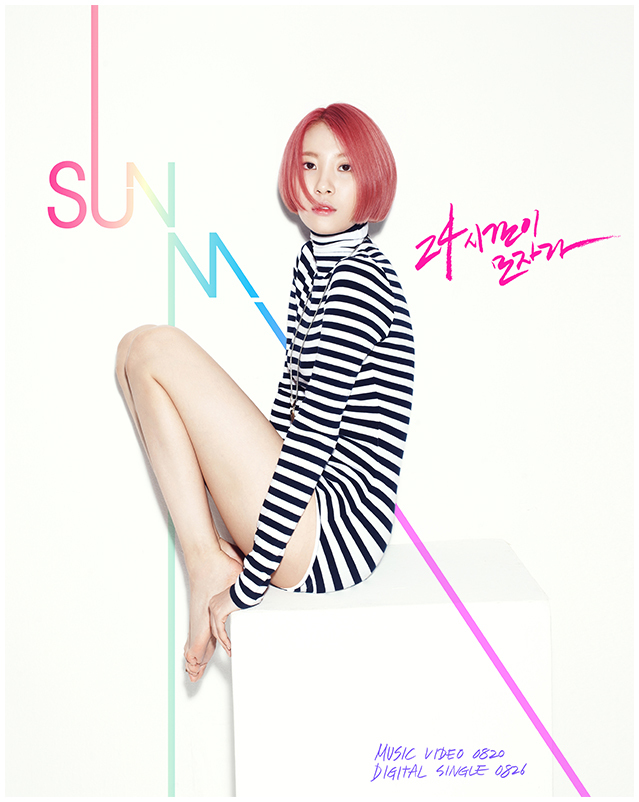 Sunmi unveiled the music video of her title song “24 Hours” on Tuesday, and is set to release the digital single on Aug. 26. The dance track depicts a woman who opens her eyes to love through a lively tango.

The agency showed much anticipation for Sunmi’s new album which is fully produced by Park Jin-young, JYP Entertainment’s CEO and founder.

“Park participated in and was focused through the whole process of producing the album, from choreography and stage costumes to the song and the music video,” an agency official said.