By Seo Jee-yeon
Published : Aug 19, 2013 - 20:20       Updated : Aug 19, 2013 - 20:21
Under the “creative economy” initiative set out by President Park Geun-hye’s administration, Korea has been promoting the integration of information and technology, scientific discoveries and culture for sustainable growth with a strong focus on creativity and innovation.

But a global survey that evaluates innovation showed Korea falls behind Asian rivals such as Hong Kong, indicating that Korea must improve and work to become a more innovation-driven economy.

In the 2013 global innovation index, a collaborative publication launched in 2007 by INSEAD, the World Intellectual Property Organization and Cornell University that features a ranking of the innovation levels of economies, Switzerland came out on top, followed by Sweden and the United Kingdom. 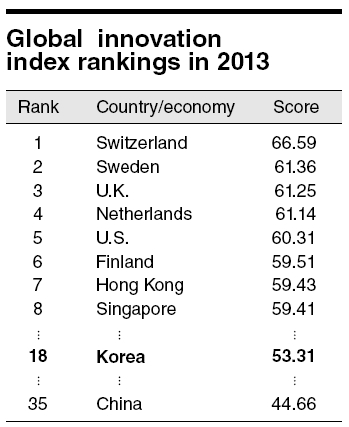 Among countries in Asia, Hong Kong and Singapore placed seventh and eighth, respectively, whereas Korea improved slightly from last year but fell behind its rivals, placing 18th.

The GII embeds a holistic view of innovation and can be broken down into two major subindices, the inputs and outputs, each one weighted equally in the calculation of the overall GII scores.

Inputs define aspects of the environment conducive to innovation within an economy, while outputs are the results of innovative activities.

In order to rank high on the GII, a key factor is to have a good balance between inputs and outputs, which suggests the country is pursuing a good policy-mix.

Korea gained higher scores in inputs than outputs, especially showing a lack of what the index calls “creative outputs.”

In an email interview with The Korea Herald, Soumitra Dutta, dean of the Johnson Graduate School of Management at Cornell University and leader of the GII project, explained that Hong Kong and Korea have very opposite profiles, which suggests that the development and growth strategies of the two nations differ.

Hong Kong’s main weaknesses include “human capital and research” and “knowledge and technology outputs,” both elements that are traditionally linked to innovation and are also Korea’s strengths.
“Had this index been targeted towards science and technology, Korea might have ranked higher than Hong Kong,” Dutta said.

Singapore, although it generally presents a balanced profile, has a relative weakness in creative outputs, similar to that of Korea.

When asked to comment on how Korea could improve its creative outputs, he said, “Different nations adopt and adapt different strategies. Technologically inclined nations will do better in knowledge and technology outputs, such as Korea, while other economies excel in intangible and creative goods and services, including an optimal use of online platforms,” suggesting that Korea should focus on improving the latter.

Meanwhile, in the perspective of “society as a whole, innovations are the means to get solutions to problems or needs arising in our daily lives,’’ the professor explained.

He also added that the definition of innovation has broadened as it is no longer restricted to R&D laboratories and to published scientific papers.

The increasing exposure to global competition, sophisticated markets and higher consumer expectations prove this to be true.

“Innovation is more general and horizontal in nature, and includes social innovations and business model innovations as well,” he said. “Recognizing and celebrating innovation is seen as critical for inspiring people ― especially the next generation of innovators and young entrepreneurs.”

Dutta’s core outlook on the importance of innovation mirrored that of Park’s creative economy paradigm.

“Many young people are looking for jobs but the government and large firms from the private sector are unable to provide these jobs today. What better way to address this global challenge other than to enable bright young people to innovate and create their jobs themselves through entrepreneurial ventures?” he said.