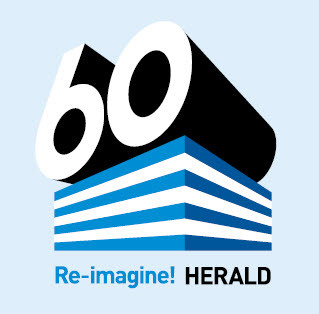 The Korea Herald, the flagship unit of Herald Corp., has served readers at home and abroad as the country’s largest English newspaper by offering quality news and analysis over the past six decades.

The paper began on Aug. 15, 1953, as a four-page tabloid called The Korean Republic, and adopted its current name in 1965. In the following years, The Korea Herald grew to become the nation’s largest-circulation English newspaper, committed to serving as a bridge of information between Korea and the world.

During the nation’s historically turbulent years, the paper witnessed and tried to record the events affecting Korea and Koreans as accurately and faithfully as possible, whether the news was good or bad, exhilarating or disheartening.

Celebrating 60 years as “Korea’s window to the world,” The Korea Herald is determined to broaden its horizons and further sharpen its journalistic edge, both on paper and digitally as the global media industry undergoes rapid transformation.

Continuing the paper’s journalistic spirit grounded in what readers deserve to know, we are launching a podcast and three in-depth series as part of our 60th anniversary celebrations.

● Herald Podcast: The podcast, designed for Korean learners of English, features staff reporters explaining easy-to-understand English news articles, initially on a weekly basis. Readers can access the news text and notes on useful expressions on the English Cafe section of the homepage. The podcast is the latest facet of the paper’s digital strategy that includes real-time text messaging services, a Korean-language website and an array of mobile apps for both Apple’s iOS and Google’s Android devices.

● Beyond Design: The Korea Herald plans to hold Herald Design Week 2013 in October. The paper will publish a series of articles on the latest design trends and issues in the run-up to the much-anticipated annual event. More attention is now being placed on “sustainable design,” in a departure from the view that design is merely a tool to make money without regard for the welfare of the earth. The paper’s new design series will examine Korea’s design identity, packaging industry, operations, recycling and other related topics, offering fresh insights into what drives today’s trends in connection with sustainable design.

● Korea-U.S. Alliance: The Korea Herald will run a series of articles to mark the 60th anniversary of the South Korea-U.S. alliance. The series starts with an overview of how the alliance has evolved into a multifaceted, value-based partnership from a collective defense mechanism centered on the Korea-U.S. Mutual Defense Treaty. The series will look into the strategic inflection point faced by the U.S. military after a decade of war in Iraq and Afghanistan, its implications on the structure of Korea’s armed forces and the future of the alliance.