Bill Richardson, former governor of New Mexico and Donald Gregg, chairman of the Pacific Century Institute, discussed Pyongyang’s nuclear threats, its fledgling leadership and U.S. policy toward it during the forum hosted by Asia Society.

“Engagement is better than isolation. And isolating North Korea is not working, not going to work,” Richardson said, insinuating that U.S. policy, or what critics call “strategic patience,” was not an effective approach. 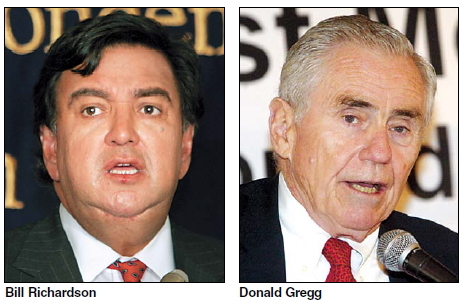 Due to Pyongyang’s nuclear saber-rattling, deadly provocations and frequent breaches of international commitments on its denuclearization in recent years, Washington and Seoul have shunned talks with Pyongyang.

The allies now call on the regime to show sincerity first in its denuclearization efforts should it want talks with them for diplomatic and economic assistance that the isolated North desperately needs to shore up its debilitated economy.

Gregg also stressed Washington should exert more efforts to communicate with Pyongyang, pointing out that it once engaged with former Chinese leader Mao Zedong when he led the Cultural Revolution from 1966-1976.

During the notorious movement to enforce communism, millions of people are believed to have suffered persecution and abuses such as arbitrary imprisonment, torture and seizure of property.

“I think the single greatest diplomatic stroke the U.S. has made since the end of World War II is (President) Nixon’s opening to China. Was that endorsing what they have done? Absolutely not,” he said.

“It was seen very correctly as the only way to get them eventually to stop doing that. That is the point of dialogue. We are saying to them you get out of your isolation and cave, and make yourself realize your own interest to behave better for your own people.”

For engagement with the reclusive state, Richardson, who has visited the North eight times, said concerned countries should craft “out-of-the-box” diplomacy based on creativity.

“We need, perhaps, special envoys, we need sports diplomacy,” he said. “Dennis Rodman and others might be able to open up a nation... the philharmonic orchestra there from New York, music, culture and the interlocutors we haven’t thought of.”

Touching on Chinese influence over its wayward ally, Gregg said it would be only limited given the growing veiled hatred between them.

“I talked to the Chinese about their dealings with North Koreans and they said it was difficult. The North Koreans do not like to be beholden to anybody,” he said.

“The Chinese do have influence but it is limited influence. I think our (U.S.) ability to influence North Korea is huge, but we limit ourselves by handcuffing ourselves with something that’s called strategic patience.”

Both experts noted President Barack Obama’s full foreign policy roster including Syria, Iran and China might have nudged the North Korea conundrum off the top of his priority list.

Relations between Beijing and Pyongyang seemed to have deteriorated recently as the Asian power’s patience has been wearing thin with its ally’s behavior. Beijing recently joined U.N. sanctions to punish Pyongyang for its third nuclear test in February and repeatedly stressed its stance for a nuclear-free peninsula.

Richardson, who also formerly served as U.S. ambassador to the U.N., is known for his engagement with North Korea’s humanitarian issues.

Gregg, after years of serving on the U.S. National Security Council, served as ambassador to Korea from 1989-93. He also chaired the Korea Society from 1993 to 2009.

Asia Society Korea Center was established in 2008 to bolster exchanges in education, arts, and other areas, between Asia and the United States.

Asia Society founded in 1956 by John D. Rockefeller, is a nonprofit educational institution dedicated to the study of Asian countries. Its key goal is to promote mutual understanding and to strengthen the partnership between Asia and the U.S.