By Kim Yon-se
Published : Jul 11, 2013 - 20:11       Updated : Jul 11, 2013 - 20:11
The Korea Herald is publishing a series of articles titled Global Brand as part of the first installment of Power Korea. Korea’s success story is a 60-year-old tale written by not one, but many who worked to build one of the world’s most powerful nations from the ashes of war. This Global Brand series is designed to honor those who made this Korean Dream come true. This is the 16th part of the Global Brand series. ― Ed.


In 1998, Hana Bank ranked 578th among the world’s 1,000 largest banks by core capital, according to an assessment by the London-based Banker magazine.

Hana Financial Group, whose flagship is Hana Bank, 15 years later, made the world’s top 100 bank list with a ranking of 81st.

After Korea Exchange Bank was incorporated as a new subsidiary last year, the financial group set a target of joining the world’s 50 major financial service firms by 2015.

Based on total assets, Hana Financial grabbed the No. 3 spot in Korea with $265 billion as of the end of 2012.

Over the past few years, the group has set trends in financial markets as it pioneers new business fields by utilizing the practical knowledge and information it has accumulated through close relationships with corporate and retail clients. It is also expanding its global presence.

Its chairman Kim Jung-tai has worked for Hana Financial and Hana Bank for more than 20 years. The chief has continued to pledge to play the role of a “helper,” who will pave the way for employees to optimize their abilities.

“I believe true leadership is not coercive pulling, but inducing natural support from employees,” Kim has said. 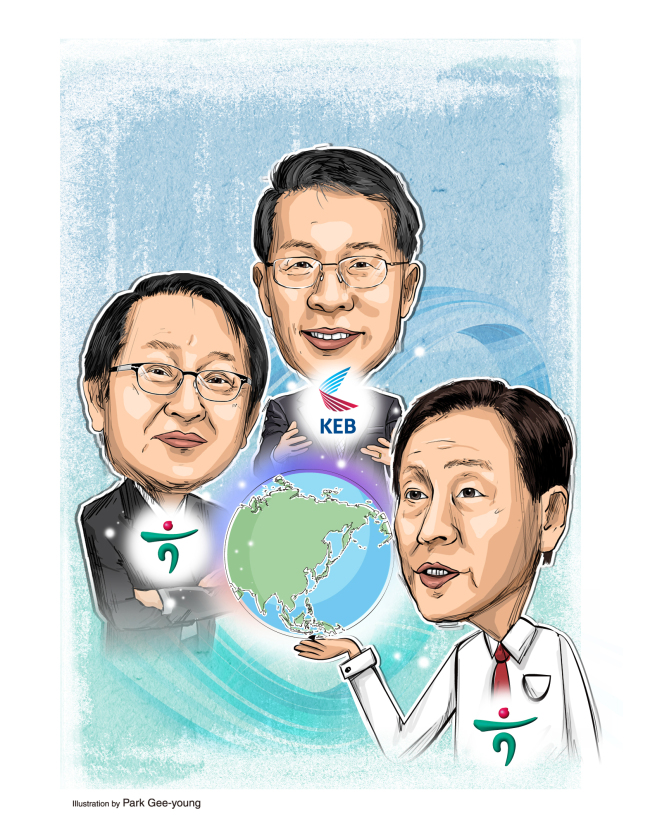 For the flagship banking sector, Kim said the group will seek further opportunities for mergers and acquisitions in Asia and North America. The group has actively been tapping China, Vietnam, Indonesia, the Philippines and Korean-American-owned lenders in the U.S.

It also aims to make inroads into countries with abundant natural resources such as Russia, Kazakhstan, Uzbekistan and Ukraine.

In particular, the group is seeking to bolster the lucrative private banking service in the Chinese market, targeting wealthy customers.

Hana Financial has established a strategic partnership with China Merchant Bank, the country’s sixth-largest lender, beefing up ammunition for its planned portfolio diversification and expansion of China operations.

Their bilateral pact will involve cooperation on a range of joint financial services and interchanges of staffers.

The group expects the tie-up with China Merchant Bank could have a positive effect on Hana SK Card as the strategic partner captures a 23 percent share in the Chinese credit card market.

“The domestic financial market has already been saturated. There is no other way than making inroads into the overseas market in future businesses,” said Kim.

The chief is also taking on the significant role of integrating the corporate cultures of Hana Bank and KEB.

The group is also pinning hopes on KEB’s many overseas branches for its global marketing.

Hana Bank chief executive Kim Jong-jun has reiterated that the commercial bank’s global expansion strategy will be sought in close collaboration with its affiliate KEB.

“After securing business networks through advancement, we will open more branches by seeking business alliances with local banks in the countries,” said the bank’s CEO.

After the 2008 global financial crisis, Hana Bank made it a top priority to achieve qualitative growth and financial soundness both at home and abroad.

Market insiders including banking research analysts share the view that the bank made headway in its move to create an Asian Belt by effectively weathering the global crisis and achieving remarkable growth in China.

The flagship bank unit, in coordination with its brokerage affiliate Hana Daetoo Securities, is looking to find new revenue resources in the investment banking sector.

In 2010 the bank won an award for its efforts in providing consumer-oriented products and services. Awarded by the Korea Society of Consumer Studies, the accolade recognizes the best consumer-oriented company in Korea every year.

In 1971, Hana Financial’s former original entity Korea Investment & Finance was founded with 26 employees. Currently, some 18,800 staffers with in-depth financial expertise and asset management skills are working in the group.

Since its humble beginning with two branches in 1971, the group has increased the number of outlets in its domestic and overseas network to 1,240.

It is also vitalizing its contributions including philanthropic activities to society, seeking “shared growth” by fulfilling its obligation as a good corporate citizen.