By Korea Herald
Published : Jun 17, 2013 - 19:50       Updated : Jun 17, 2013 - 19:50
The Japanese word “choju,” meaning longevity, implies, with its kanji, joyous celebration of long life. Intrinsically, it is a joyful thing for people to live long. But if a society has many people who age in solitude, isolated from their families and local communities, it cannot be called choju. It should rather be called “roka shakai,” or a society that weakens as it ages.

Japan is in the process of accelerated graying that is unprecedented. It is heading toward an unknown territory that no other country has visited. There are two diverging paths ― one leads to a weakening society, the other to a long-lived society.

In Japanese, the antonym for isolation or solitariness could be “kyosei” or living together. In light of this, we hope new systems of mutual assistance, which will supplement community and family bonds, will be created along the way toward a long-lived society. 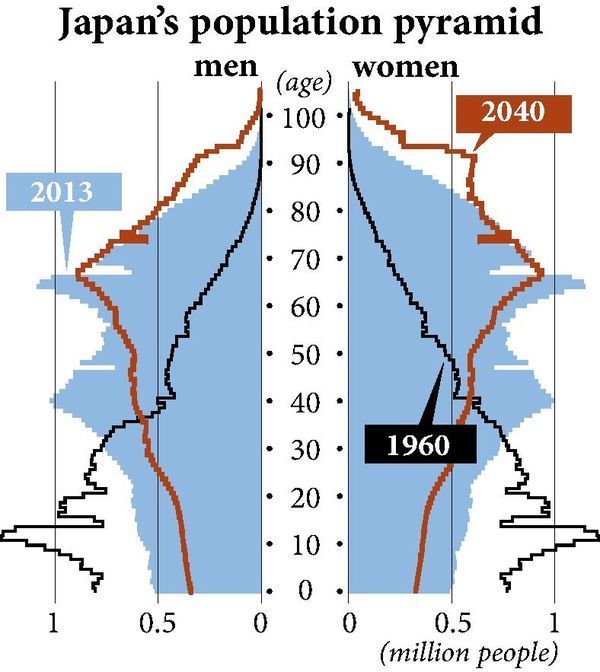 In 1971, people began moving into Tama New Town, a newly developed residential area in the suburbs of western Tokyo. It was shortly after the Osaka Expo ended and around the time when the nation’s rapid economic growth peaked.

Many young couples moved into the residential area and began to have children. There were shortages in kindergartens at first, followed by primary schools and middle schools.

And now, the major problem is the aging of that area’s residents.

A meeting held in Tama New Town on May 17 was marked by a tense atmosphere. The willingness of participants to face up to the looming situation was palpable. It was apparent that they had no desire to back away from the problem.

“It’s necessary to create a future-oriented town based on the idea of the ‘care cycle,’” said professor Toshihiko Hasegawa of Nippon Medical University, who specializes in health policy and management. He plays a leading role in the Tama project, which is aimed at exploring systems to allow residents to receive medical, nursing care and welfare services in a continuous and integrated manner.

Participants in the meeting included medical staff, welfare-related nonprofit organization members and municipal government officials of the city. The project is also aimed at linking various social security measures so that not only elderly people but also many other residents can connect to them.