By Korea Herald
Published : May 6, 2013 - 20:17       Updated : May 6, 2013 - 20:17
The Korea Herald is publishing a series of articles on infrastructure as part of its second installment of Power Korea. Korea’s success story is a 60-year-old tale written by not one, but many who worked to build one of the world’s most powerful nations from the ashes of war. This series features the development and global competitiveness of Korea’s infrastructure. The special articles were made in cooperation with the Ministry of Land, Infrastructure and Transport. This is the first part of the infrastructure series. ― Ed.

Korea’s economic success in that period is attributed to many factors, including the government-driven economic policy and the Korean work ethic.

The Hyundai Research Institute, a private think tank in Korea, attributes the nation’s economic achievements to its infrastructure development in accordance with a series of ambitious five-year plans from 1962 to 1981.

In the 1960s, Korea heavily emphasized labor-intensive industries such as wig, textile and plywood manufacturing. To develop such industries, the government started to develop industrial complexes in the 1960s and infrastructure for water management.

In the 1970s, the government cultivated heavy industries such as steel and ships by building heavy industrial complexes and nationwide transportation infrastructure such as expressways.

According to the World Bank, proper investment in infrastructure development can lead to long-term growth. 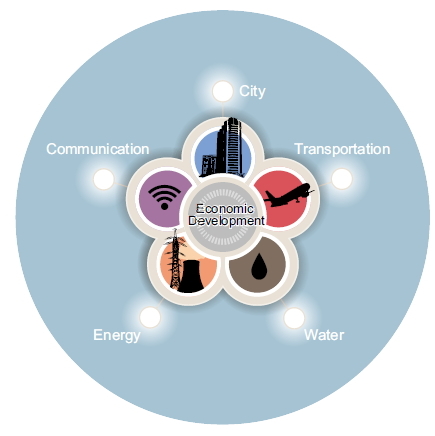 With the launch of an initiative for industrialization, the Korean government capitalized on developing industrial complexes from the 1960s to maximize the nation’s production capacity with limited capital and resources, mainly using foreign aid. It also developed a densely populated residential district near each complex to minimize administrative costs and to better use the infrastructure surrounding the complex. Ulsan industrial complex, the nation’s largest oil and petrochemicals complex, is a classic example of this policy.

Another major infrastructure development project in this period was the construction of multipurpose dams. These dams were built to secure and distribute water for agricultural and industrial use and for flood control.

The 1970s: Infra-building for heavy and chemical industries

The emphasis on highways in the beginning of the 1970s fit well into the development of export-oriented heavy and chemical industries. The government completed the four-lane, 428-kilometer Gyeongbu Expressway linking Seoul and Busan in 1970, and constructed export-oriented heavy industry complexes along it.

The year 1980 was a turning point for the Korean economy. Not many major infrastructure development projects were made in this time period. However, there were still two sectors that the government invested in heavily.

One was construction of nuclear power plants to meet rising energy demand from heavy and chemical industries. The other was a series of urban planning projects to host major sporting events, including the Asian Games in 1986 and the 1988 Olympics.

The “2 Million Home Building Project,” aimed at relieving the housing shortage and stabilizing housing prices for low-income citizens, was a key infrastructure building project in the 1980s.

Started from August 1988, the mission of building 2 million homes ― enough to house one-quarter of the Korean population at the time ― was completed in just three years. In line with the same policy direction, the government announced the development of the first new town in Seongnam, a satellite city of Seoul, in 1989.

The top policy priority in the 1990s was globalization. The world economy was quickly coming together after the breakup of the Soviet Union and market liberalization in China. The government followed the international trend by joining the World Trade Organization.

At its core, the government’s infrastructure development policy also focused on improving competitiveness. Railroads were upgraded with the introduction of high-speed trains. Also, a new international airport opened to cope with the increase in air traffic along with new cargo ports.

Roads were built or extended for the balanced development of the land rather than to connect big cities.

The 2000s: Infrastructure for ICT

In the 2000s, Korea faced a multitude of different challenges: globalization, climate change, increasing demand for quality of life and consequential need for sustainable development.

Korea’s ICT infrastructure started to be developed from 1980. Korea has now emerged as the world’s most wired nation, with 86 percent broadband penetration, and mobile phones are another ubiquitous feature of Korean life.

The 1950-1953 Korean War destroyed much industrial infrastructure, and Korea had to start building again from scratch. According to an article in Foreign Affairs magazine in 1961, the Korean economy was heavily dependent on foreign aid with an unemployment rate of 25 percent and a per capita income of less than $100. Just half a century later, however, Korea has become the world’s 15th-largest economy by GDP, transforming from beneficiary to benefactor of development aid.

At the forefront of this dramatic change was the government’s investment in infrastructure and urban planning projects. The country’s infrastructure development was levied by effective policy support. Korea’s long economic ascent was driven by full-scale investments in infrastructure to improve key industries’ productivity.

Korea’s development model has become a benchmark for a number of emerging economies. Korea is gearing up for cooperation and exchanges with those countries to share the strategies and polices it used to achieve its economic success over the last 50 years.