Zone to comprise districts for materials, tourism, components and logistics

By Seo Jee-yeon
Published : May 2, 2013 - 19:56       Updated : May 2, 2013 - 19:56
DONGHAE, Gangwon Province ― The new free economic zone to be established on the east coast will focus on attracting foreign materials and parts companies toward the goal of building an industrial cluster in Korea, officials said.

The East Sea Free Economic Zone Authority, which will oversee the massive project, was launched on Tuesday with the aim of completing the construction of the East Sea (Donghae) FEZ by 2024.

An FEZ refers to a specially designated economic zone intended to attract foreign investment by improving not only business but also living conditions in the region. Korea runs six FEZs, including the Incheon FEZ near the Incheon Airport and Busan-Jinhae FEZ in South Gyeongsang Province. The government added two more FEZs on Feb. 4 this year, giving the okay for development of the East Sea FEZ and North Chungcheong Province FEZ. 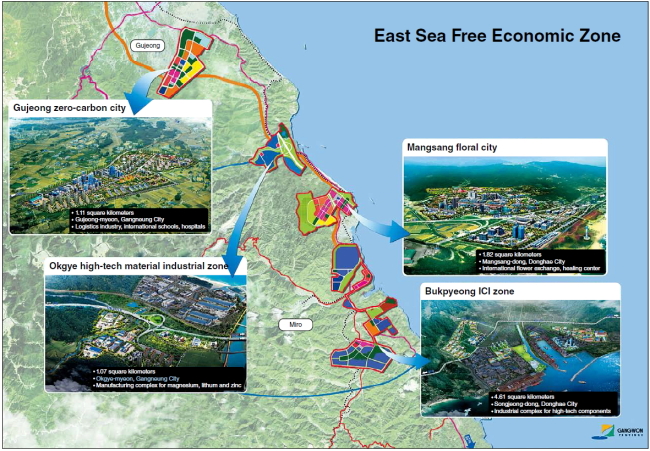 “Gangwon Province, where the East Sea FEZ will be located, is rich with non-ferrous metal resources for high-tech industries, including magnesium, tungsten and rare-earth metals. This is why the upcoming East Sea FEZ will seek to build a globally competitive industrial cluster for foreign materials and parts companies,” said Yun In-jae from the East Sea FEZ Authority.

“The vision of the East Sea FEZ has attracted support from the Ministry of Trade, Industry and Energy in that the ministry is seeking to cultivate the nation’s less competitive materials industry.”

Officials from the authority predicted that the high-tech material industry zone in Okgye was likely to be developed faster than others as the zone is next to POSCO’s first magnesium refining plant. POSCO has been capitalizing on the materials and energy businesses as its new growth engines.

“POSCO’s opening of its first non-steel materials-related plant last year in Gangneung City will be helpful to attract foreign material companies to the Okgye zone, in particular, from Japan, the U.S. and Germany,” Yun said.

Besides industrial zones, the East Sea FEZ Authority also plans to pitch the development of a floral city in Mangsang and an environmentally friendly city in Gujeong within the East Sea FEZ in a bid to offer world-class living conditions to foreign residents.

In the short term, the success of the East Sea FEZ depends on attracting property developers. For this, most of all, the zone will require an advanced logistics environment, including expressways and ports, experts said.

Despite rich mineral and natural resources, the East Sea FEZ is far from Seoul and its adjacent area. By car, it takes about three hours to get to the zone from the capital. It also will have to further advance ports nearby for a better logistics environment.

“The hosting of the 2018 Winter Olympics in Pyeongchang, a one-hour drive from the East Sea FEZ by car, will be helpful to advance the transportation and logistics environment of the zone,” said Lee Dong-chun from the Gangwon Provincial Government.

“Once the inland logistics environment is improved and the Donghae port is expanded, the East Sea FEZ could take advantage of its geopolitical location in Northeast Asia, reaching to North Korea, China, Japan and Russia.”