The combined debt of large public companies such as Korea Land & Housing Corp. and Korea Electric Power Corp. reached 392.96 trillion won in 2012, up 8.7 percent from 361.4 trillion won a year earlier, the data compiled in accordance with each firm’s regulatory filings said. Meanwhile, the national debt reached 445.2 trillion won last year, according to the Finance Ministry. 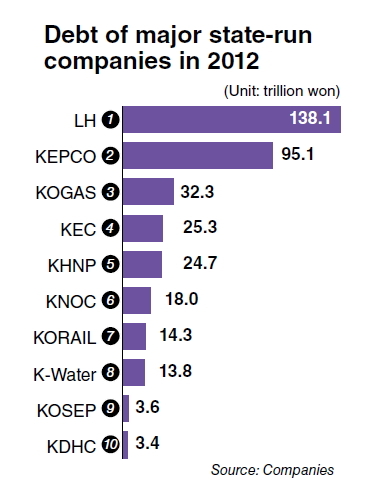 In the ranking of debt among the top 28 state-owned companies, LH, a state-run land and housing developer, had the largest totaling 138.1 trillion won at the end of last year, up 5.8 percent from a year earlier. KEPCO and Korea Gas Corp. followed with debts of 95.1 trillion won and 32.3 trillion won, respectively.

Analysts said the surge in state-owned companies’ debt resulted from financing and managing large-scale national infrastructure-building projects like the controversial four-river restoration project or overseas energy exploration projects, all of which were initiated by former President Lee Myung-bak.

Traditionally, state-owned companies in Korea have taken advantage of the government’s support in many aspects. They have easily borrowed money from banks at lower interest rates based on the government’s guarantee, and have gained a relatively healthy credit rating, regardless of their debt level.

With the debt of state-owned companies swelling rapidly over the past few years, however, international credit agencies, including Standard & Poor’s and Moody’s, are raising concerns about the impact on the nation’s credit rating.

“In line with a meeting with the ministry, the number of international credit agencies launching on-site audits for the nation’s leading state-owned companies is increasing,” a Finance Ministry official said.

The ministry confirmed a delegation from Moody’s was conducting the on-site audit for three or four government-owned companies, including KORAIL, a state-run railroad operator, from April 17. Debt of KORAIL has continued to rise since it invested in the Yongsan development project in 2006. The nation’s single biggest property development project recently went into loan default.

In a recent report, Moody’s said snowballing debt of South Korean public companies could be a bigger threat to Korea rather than the geopolitical risk triggered by hostile North Korea.

In a bid to control debt of leading public companies, the ministry said it will tightly evaluate the financial health and debt management capability of an organization in its annual performance review on 28 public companies whose assets exceed 2 trillion won ($1.8 billion) and correct their malpractices.

“If the ministry finds a case of financial mismanagement, it will cut payroll of the firm’s top management and budget for operations,” the ministry added.