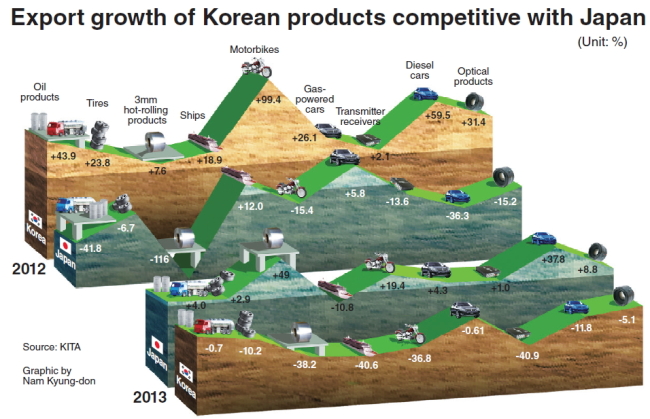 Concerns over the impact of the weakening yen on the nation’s exports are proving well founded.

About 40 percent of Korean-made products that compete against Japanese goods in the global market posted reduced export figures for the first two months in 2013 compared with the same period a year ago, the Korea International Trade Association said in a press release.

In a KITA survey of the nation’s 49 export items in competition with Japanese goods, including cars, ships and petroleum products, exports of 24 items shrank in January and February. In contrast, 21 Japanese export items posted positive growth.

Korea has a similar industrial structure to Japan. Among the nation’s top 100 export items, 49 face strong competition from Japanese goods.

KITA urged the government to take action against continued devaluation of the yen, which could deal a blow to the nation’s exports and economic growth.