The communist state has positioned two Musudan missiles with ranges beyond 3,000 kilometers at a launch site on its east coast. The intermediate-range missiles can, in theory, reach Guam, a key strategic U.S. base in the Asia-Pacific. 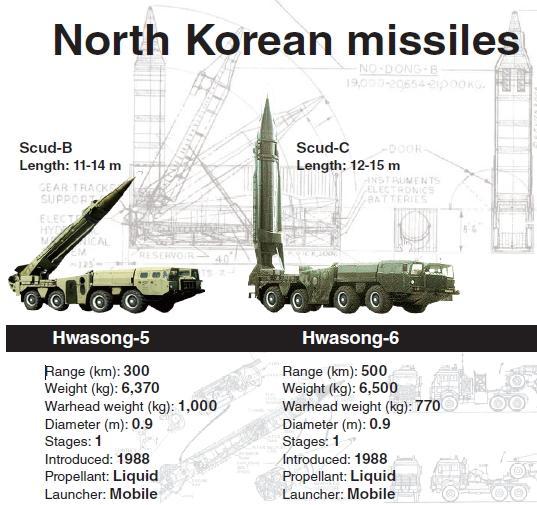 The mobile launchers are known to be used to fire shorter-range missiles such as Scud missiles with ranges of 300-500 km and Rodong missiles that can travel some 1,300 km.

Scud missiles can target South Korea while Rodong missiles are capable of striking Japan. Musudan missiles, which have been deployed since 2007, can travel over the Pacific Ocean to Guam.

As of 2009, some 50 Musudan missiles were deployed. The Musudan has yet to be tested openly, but some observers speculated Pyongyang might have tested it at foreign sites such as those in Iran.

The longest-range North Korean missile under development is the Taepodong-2 missile, which is thought to have a range of some 6,700 km, far enough to reach the U.S. mainland.