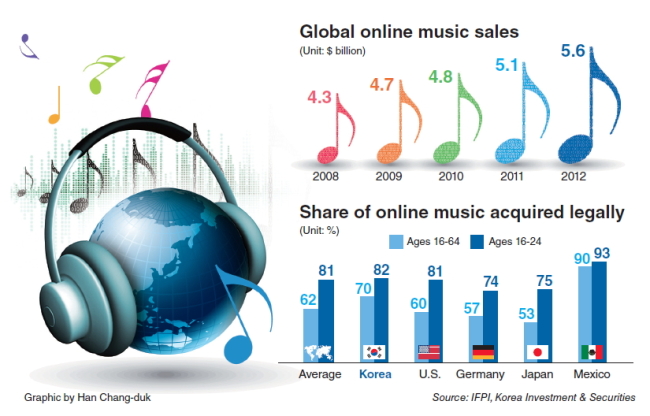 The music industry reported global sales growth last year for the first time since 1999 on rising online sales, prompting analysts to paint a rosy picture for the K-pop industry.

The increase, 0.3 percent, was minimal, and the total revenue of $16.5 billion was nothing comparable to its peak of $38 billion over a decade ago, figures reported by the International Federation of the Phonographic Industry showed.

But the digital revolution, which appeared to be killing the music industry with rampant online piracy, has now become the music industry’s savior. Digital sales rose enough last year to offset the decline in CD sales. According to the federation, the global online music market grew to $5.6 billion last year, a 9.8 percent increase from $5.1 billion in 2011.

Digital revenue comes in various forms including sales of downloaded singles and albums, from services like Apple’s iTunes, and subscription-based offerings such as Spotify and Korea’s MelOn. The number of subscribers to such services rose 44 percent last year to 20 million, the federation said.

“K-pop-related stocks such as SM and YG Entertainment have so far grown thanks to hallyu, but from now on, they will rise due to changes in the media platform and copyright environment,” said Park Joong-jae, an analyst at Korea Investment and Securities.