Korean exports to the world’s third-largest economy plunged 17.4 percent to $2.89 billion in February from a year ago, the Korea International Trade Association said.

Korean exports to Japan fell below the $3 billion mark again after nose-diving 23 percent to $2.75 billion last April compared to the same period in 2012. Sales of Korean goods to Japan saw a temporary recovery for one month, rising 1.1 percent in May last year, but they have been on a downward trend since June aside from November 2012 to January this year. 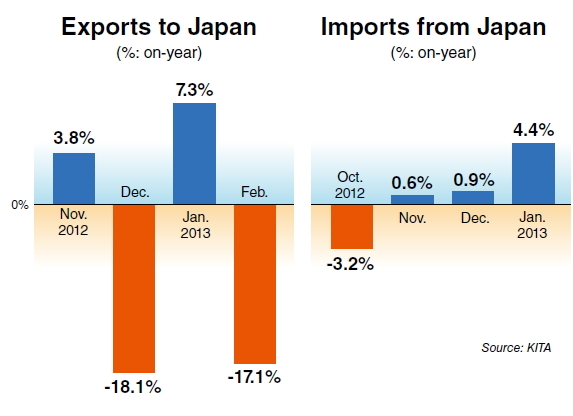 On the contrary, Japan’s exports to Korea showed the opposite performance. Japan’s monthly shipments of goods to Korea posted negative growth for the first 10 months last year before recovering in November. They rose 0.6 percent on-year in November, 0.9 percent in December and 4.4 percent in January.

The continued fall in exports to Japan from the second half of last year is raising concern about the negative impact of the weakening yen on the nation’s overall exports.

Regarding the impact of the weak yen on Korean exports, the Korea Institute for Industrial Economics and Trade, a state-funded think tank, said in its recent report that every drop of 1 percent in the yen-won exchange rate led to a 0.18 percent fall in Korea’s total exports. The yen-won exchange rate declined 16.3 percent between Sept. 19 last year and Feb. 29 this year, the think tank added.

“Korea and Japan have a similar industrial structure, so they compete with each other in many areas. If the yen’s value continues to deteriorate, Korean goods could further lose their base to Japanese ones,’’ said an official from Samsung Economic Research Institute.

For instance, Korea’s automobile industry is one of the business sectors hit hard by the devaluation of the yen. Exports of the nation’s five automakers dropped 5 percent to 518,251 units for the first two months of this year from a year earlier, according to industry data.

“Korea needs to step up efforts to diversify its key export items and also strengthen the competitiveness of products against Japanese competitors,” the KIET report said.

With the new Japanese administration pledging to keep its expansionary policies, government and businesses are gauging the growing impact of the weak yen on the nation’s exports.

Market watchers are paying keen attention to indicators including the nation’s export performance data in March, to be released by the Ministry of Trade, Industry and Energy on Monday. The ministry found that Korea’s exports fell 8.6 percent in February from a year earlier to $42.3 billion, hit by the yen’s slide and falling demand amid the global economic downturn.

The government signaled a possible worsening export performance in March by cutting the nation’s 2013 growth target to 2.3 percent, down from its earlier projection of 3 percent last week.

The Korean economy heavily depends on exports to meet the growth target to make up for the slump in domestic consumption.