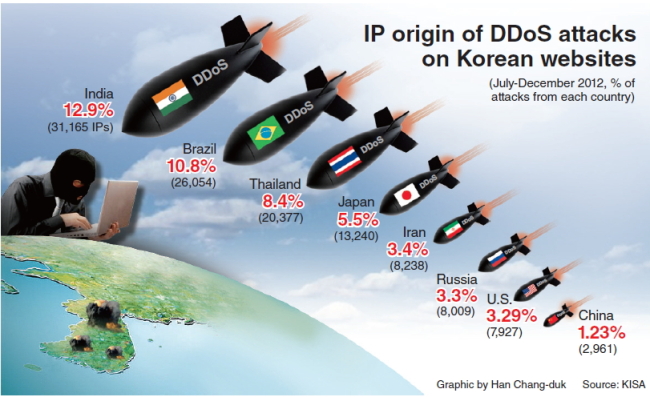 A recent study found that connections used in cyber attacks more frequently came from Internet Protocol addresses based in India, according to the Korea Internet and Security Agency.

The agency on Thursday said that India had the highest number of IP addresses that were used for distributed denial of service (DDoS) attacks against Korean websites in the second half of last year.

With India accounting for more than 12.9 percent of the foreign IP addresses participating in the cyber attack, Brazil, Thailand and Japan followed with 10.8 percent, 8.4 percent and 5.5 percent, respectively.

Chinese IP address only took about 1.23 percent of all foreign IP addresses, indicating the trend has shifted from Chinese IP-oriented attacks in the past.

The agency, however, added that the IP addresses could have been altered in the process.