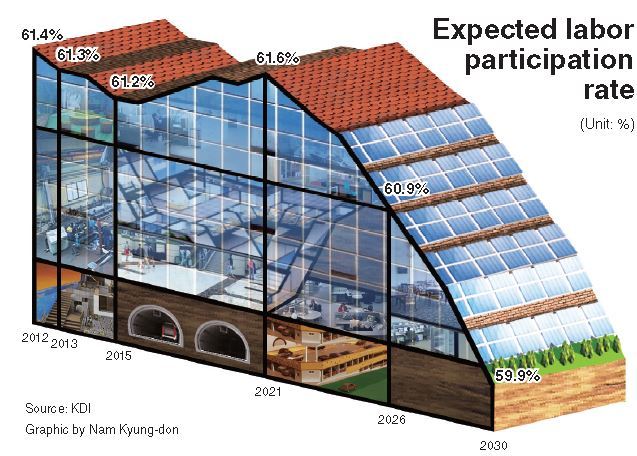 The nation’s working-age population is expected to fall after peaking in 2021, a state-run think tank said on Sunday.

The nation’s labor force participation rate, an indicator for the size of the working-age population of an economy, is forecast to hit a record high of 61.6 percent before falling steadily, the Korea Development Institute said. It added the rate was likely to fall to the 50 percent range in 2030, which means Korea will face a shortage of labor.

An aging population and low birth rate are the main reasons for the falling population of economically active workers, KDI said. Some data has shown 39 percent of the nation’s population is expected to be over 60, compared with the current 17 percent.

In an attempt to cope with the labor shortage, the think tank called for an extension of the retirement age, currently now 60, by adopting a salary peak system, which gradually reduces wages of workers after reaching a certain age in return for guaranteeing more years of employment,