Two days after the launch of the Park Geun-hye administration on Feb. 25, the National Tax Service began an investigation into 66 fake oil manufacturers and distributors charged with tax evasion, as part of efforts to implement one of the new government’s top agenda items ― bringing the shadow economy to light.

Tax evasion in the fake oil market, in which producers sell fuel with illegal additives, amounts to about 1 trillion won ($919.1 million) every year, according to Korea Petroleum Quality and Distribution Authority estimates.

“The tax agency will step up its investigation into all kinds of economic activities done off the books, which will eventually have the effect of bringing the shadow economy to light,” an NTS official said.

The tax probe into the growing fake oil market is considered to be the first action taken by the new government against tax evasion in the shadow economy.

The underground economy refers to business and economic activities, legal or illegal, that are not covered by official economic statistics and thus easily evade taxation, according to Austrian economist Friedrich Schneider.

Additional tax revenue from the shadow economy is critical for the success of the new government, which has promised to boost welfare spending without increasing taxes. To fund President Park’s welfare-related pledges, critics estimate that about 153 trillion won will be needed over the next five years.

In her first presidential secretariat meeting last Wednesday, President Park made it clear again that her administration would not seek tax hikes to fund welfare. Instead, she said it would secure funds by cutting wasteful spending and collecting revenue by regularizing the shadow economy.

The size of the nation’s shadow economy is not known, but experts agree that Korea has a bigger underground economy than other OECD countries due to the high number of self-employed people. The private Hyundai Economic Research Institute said Sunday that self-employed businesses made up one-third of the country’s total economic activity. 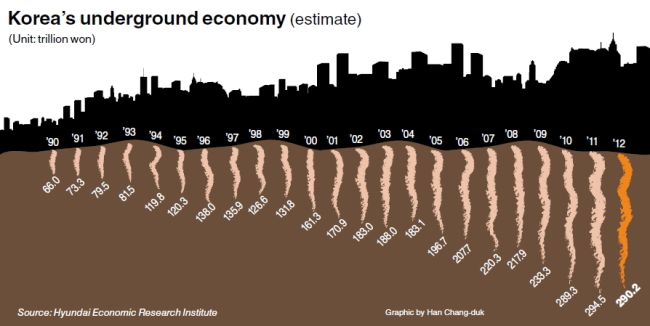 The research institute estimated the size of the nation’s underground economy last year at about 290 trillion won.

The NTS has taken a leading role in uncovering the shadow economy, and has self-restructured to increase the workforce for tax evasion investigations to 400.

“In reality, the task force will focus on cash-based, tax-dodging activities by high-income working professionals and companies, rather than illegal economic activities like drug dealing,” the NTS official said.

To achieve the best results, the NTS is pushing for the revision of the nation’s Financial Intelligence Unit law to gain greater access to data on large-scale cash transactions. Currently, financial data under the control of the Financial Services Commission only can be shared with the NTS for investigating suspected or exposed irregularities.

A bill to allow the NTS access to FIU information for tax investigations was sent to the National Assembly late last year, but the discussions have been put on hold due to privacy concerns raised by the financial sector.

“Given the fact that tax evasion in the shadow economy occurs through cash-driven transactions, it is necessary for the FIU to share information with the NTS,” the NTS official said.