KNOC to focus on post-merger integration, risk management overseas rather than expansion


The state-run Korea National Oil Corp., or KNOC, is expected to shift its gears to quality-driven growth this year from external expansion through M&A deals to become a globally competitive energy giant, KNOC officials said.

Under the initiative of the previous government to cultivate state-run energy development companies as global players, which was set in June 2008, KNOC pushed for merger and acquisition deals with oil companies in strategic regions beyond the Middle East and acquisition of lucrative oil and gas production assets overseas for the past five years.
The previous government outlined the KNOC’s global expansion strategy, stressing the need for global energy giants to cope with rising oil prices and strengthening natural resource nationalism. This refers to the global trend of countries strengthening control over their natural resources.

Against this backdrop, securing energy reserves abroad was at the top of the agenda of natural-resource-poor Korea, as energy risk directly affects the nation’s security and economic development. When it comes to oil, Korea is the world’s fifth-largest importer and ninth-largest oil-consuming nation in the world.

For fast scaling up, the national oil company turned to the M&A market and intensively sealed six M&A deals between 2009 and 2011 with such oil giants as Savia-Peru in Peru, Harvest in Canada, Sumbe and Altus in Kazakhstan, Dana Petroleum in the U.K. and Anadarko Petroleum in the U.S.

These M&A deals in strategic regions made it possible for the KNOC to have a geographically diversified exploration and production portfolio. For instance, Dana Petroleum, which the KNOC acquired for $2.6 billion through a hostile M&A in September 2010, has exploration and production operations not only in the U.K., but also in Egypt, Norway, the Netherlands and Africa. 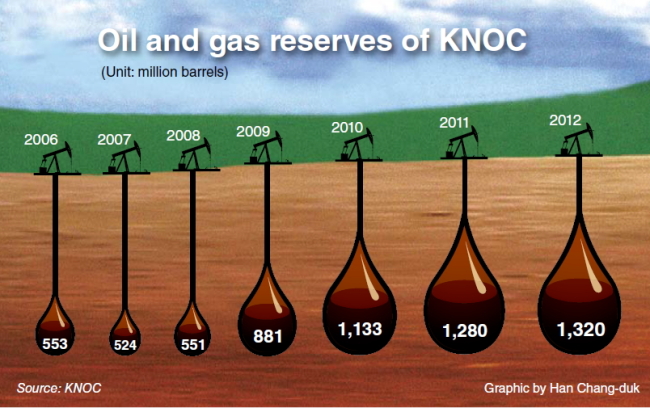 KNOC’s ranking in a survey of the world’s top energy giants also jumped to 74th in 2011 from 95th in 2009. The U.S.-based Petroleum Intelligence Weekly conducted the survey.

“Despite benefits from the increased scale, the fast growth, mainly driven by M&As, left challenges as well,” a KNOC official said.

“The company will put more focus on post-merger integration and risk management for overseas investment projects this year, which we believe will be helpful for the KNOC to seek sustainable growth with global competitiveness in the long run.’’

The KNOC’s overseas business projects, which were stepped up starting in the early 2000s, have increased to 149 projects in exploration, 12 projects in development and 57 projects in production as of December 2011, according to the KNOC.

Despite continued efforts for global expansion, the firm was asked for improvements in the success rate of exploration and production projects, which has long stood at around 15 percent, by the National Assembly during the annual audit last year.

For improvements in this area, KNOC top management said it would invest in improving the skills of evaluating projects based on possible risks, while reforming an organizational structure to strengthen talent capabilities involving E&P projects.

Another task that the National Assembly asked for was to improve financial soundness. Debt soared on the KNOC’s balance sheet between 2009 and 2011 and exceeded its capital of 10 trillion won ($9.1 billion) as it led the financing of multibillion-dollar M&A deals without other financial investors.

KNOC said it will adopt advanced financing tools and skills to improve its financial health from this year. In addition, it will consider selling noncore assets and cutting operational costs to improve financial soundness.

The KNOC’s renewed quality-driven growth strategy includes investment in gas as a new growth engine. Since its establishment in 1979, the firm has mainly participated in oil-related projects independently or in cooperation with private energy giants. The national oil company turns its eyes to the gas business as the U.S.-led shale gas revolution is transforming global oil giants into oil and gas players.

A leading project in shale gas is a joint venture between the KNOC and its U.S. subsidiary Anadarko in March 2011, which aimed to developing Eagle Ford’s shale play located in south Texas.

“The KNOC will expand deals to secure nontraditional energy sources, including shale gas and oil sand, independently or together with other state-run energy companies,” the KNOC official said.