North Korea on Tuesday conducted a third nuclear test, more powerful than the previous, in its northeast village of Punggye-ri, triggering international condemnation and warnings of tougher sanctions.

The Seoul government said the explosive power of the test was around 6-7 kilotons -- stronger than its two previous tests but far weaker than the “Little Boy” atomic bomb the U.S. dropped in Hiroshima, Japan, in 1945.

The North’s nuclear explosions in 2006 and in 2009 were 1 kiloton and around 2-6 kilotons, respectively, while the Hiroshima bombing was recorded at around 16 kilotons. A kiloton is equivalent to 1,000 tons of TNT.

Seoul officials said whether Pyongyang used highly enriched uranium or plutonium for the test was not immediately known, and the communist state had notified the U.S., China and Russia of its test plan on Monday.

An artificial earthquake with a magnitude of 4.9 was detected at around 11:57:50 a.m. in Gilju Country, North Hamgyeong Province, the Korea Meteorological Administration said. The epicenter is where the North carried out the previous atomic tests.

Less than three hours after the earthquake, the North’s official Korean Central TV announced the country had carried out a “high-level, safe, perfect nuclear test with no negative environmental impact.” It stressed a “miniaturized, lightened” atomic bomb was used.

“The nuclear test was carried out to safeguard our nation’s security and sovereignty, as part of our real response to the U.S.’ flagrant, hostile action that encroached upon our right to make a legitimate, peaceful satellite launch,” said the North’s state broadcaster.

“The test results matched our design numbers and estimates, which physically exemplifies the excellent capability of our nuclear deterrence capabilities.”

The test came after the U.N. Security Council adopted Resolution 2087 condemning its launch of the rocket in December, which experts believe had a potential range of 10,000 km.

Both current and incoming Seoul governments strongly condemned the nuclear test, underscoring that it poses a grave threat to peace and stability on the Korean Peninsula and beyond.

President Lee Myung-bak convened an emergency session of the National Security Council at an underground security control center at Cheong Wa Dae. Stressing the North’s nuclear test contravened a series of U.N. resolutions, his government pledged to take strong diplomatic measures and step up deterrence against the North.

“Its nuclear test is a clear violation of U.N. Security Council Resolutions 1718, 1874 and 2087. It is an unacceptable threat to peace and stability on the peninsula and Northeast Asia, and a direct challenge to the entire international community,” Lee’s top security secretary Chun Young-woo said during a press conference.

“The North will face grave responsibilities for all results caused by such a provocative action. We will seek necessary measures including U.N. measures in close cooperation with the international community.”

Chun added South Korea will speed up its efforts to bolster its military capabilities including the early deployment of long-range ballistic missiles under development that would put all North Korean military sites within striking range.

President-elect Park Geun-hye renewed her warning that the North will only face deeper international isolation, as she met with President Lee later in the day to discuss responses to the North’s provocation.

“I think the reason why North Korea launched the provocation at the time of government change in South Korea is to cause confusion in our government and anxiety among our people,” she said during her meeting with Lee.

“At this juncture, we should put up a united front and take a cross-partisan approach, and should not allow for any small loophole in our security.”

U.S President Barack Obama pledged to take “all necessary actions” to his country and its allies, calling the atomic test a “highly provocative act.”

“The United States remains vigilant in the face of North Korean provocations and steadfast in our defense commitments to allies in the region,” Obama said in a statement released some four hours following the first report of the nuclear test.

China’s Foreign Ministry said that it was “firmly opposed” to the test, stressing the North conducted the test “in disregard of the common opposition of the international community.”

“Bringing about denuclearization of the Korean Peninsula, preventing nuclear proliferation, and safeguarding peace and stability in Northeast Asia is the firm stance of the Chinese side. We strongly urge the DPRK to honor its commitment to denuclearization and refrain from any move that may further worsen the situation,” it said in a statement on its website. 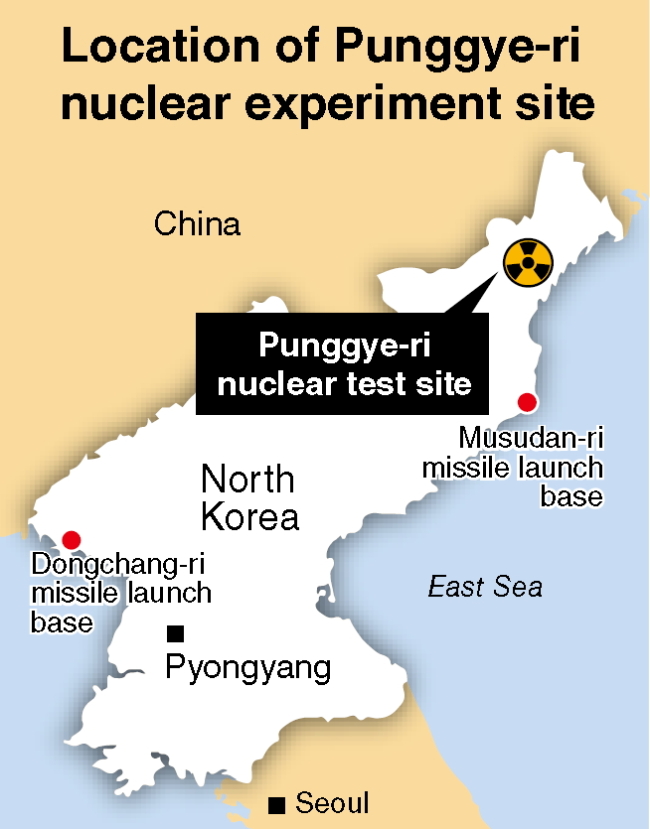 The third nuclear test is expected to affect the incoming Seoul government’s policy toward North Korea. Park has stressed a dialogue-based approach, but her policy could face some readjustment amid the North’s push for elevated nuclear power status, observers said.

South Korea, the rotating chair of the UNSC for this month, called for an emergency meeting at 11:00 p.m., Korean time. The UNSC was expected to issue a statement condemning the test, which could be read out publicly by Seoul’s Foreign Minister Kim Sung-hwan, who is now visiting New York.

Observers say the UNSC could adopt additional sanctions such as freezing the North Korean leadership’s overseas financial assets and sanctioning vessels that travel to the reclusive state.

But it would be unlikely the UNSC would quote Article 42 of the U.N. Charter’s Chapter 7, which offers grounds for military action, in a fresh sanction against the North as China, the sole major ally of the reclusive state, is likely to oppose it, they noted.

There are many cases in which the UNSC quotes Chapter 7, which includes Article 41 authorizing economic and non-military sanctions, and Article 42 for military options. But Beijing has been opposed to quoting Article 42 to punish the North.

The nuclear test came as a surprise. Some observers raised the possibility that the North might delay or cancel the test plan as Beijing and other countries had made aggressive efforts to dissuade the North from carrying it out.

“We had some optimism that the international community could negotiate a way to dissuade the North from the test. But North Korea appears to have made a decision to develop nuclear arms to maintain its regime,” said Yoo Ho-yeol, North Korea expert at Korea University.

“The test also showed that China has only limited influence over the North. But Beijing might not seek a measure that could deal a direct blow to the North.”