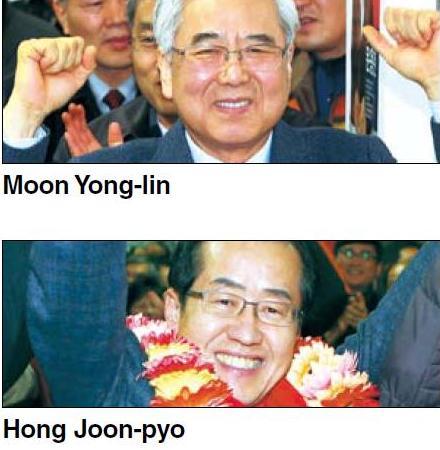 Moon, 65, emeritus professor at Seoul National University, had captured 53 percent of the votes followed by his liberal rival Lee with 37 percent as of midnight, according to the National Election Commission.

By winning the governorship, the fourth-term lawmaker made a successful comeback to the political scence after failing to win a seat in April’s general elections for Seoul. In July, he was also forced to step down from the top post of the former Grand National Party, facing mounting pressure from party members after a series of scandals and the party’d defeat in the Seoul mayoral election.

The new Seoul education chief will immediately start his term, filling the void left by former Seoul education chief Kwak No-hyun, who was stripped of the post in September upon receiving a one-year prison term for bribing a fellow candidate to withdraw his candidacy in the 2010 election.

The superintendent oversees 54,000 employees in 2,100 public kindergarten, elementary, middle and high schools with a budget of 7 trillion won ($6.5 billion) a year. Moon is against the disgraced superintendent Kwak’s ideas, including the abolition of elite private schools and the national scholastic test. He also plans to scrap tests for first-year middle-school students to allow them to focus on planning for their careers.

The post of South Gyeongsang governor has also been vacant since July, since former governor Kim Doo-kwan left to run for president.

The new governor promised to fight corruption and attract new investment to the country’s southeastern region by forming a task force consisting of experts. He also vowed to work closely with the central government and promote the region’s economy.