By Korea Herald
Published : Dec 20, 2012 - 00:32       Updated : Dec 20, 2012 - 00:43
Voter turnout for the 18th presidential election exceeded 75 percent Wednesday as the neck-and-neck race pushed people to the polling stations to tip the scales in favor of their preferred candidate, despite freezing weather.

“(In this election) there was a single candidate from both liberal and conservative camps and the race was too close to call, which drew much attention from the voters,” said Choi Young-jin, politics professor at Chung-Ang University.

“Another factor for high voter turnout is that those in their 20s and 30s participated more in the election as they paid keen attention to issues concerning their generation such as unemployment and tuition fees.”

“As opinion polls showed that the race was too tight, voters might think that their ballots have a critical impact on the political landscape,” he said.

“Voters also push themselves to the polling stations as they are aware that voter turnout is also a key variable that could determine the election outcome.”

According to a recent survey by the National Election Commission, 79.9 percent of those questioned expressed their willingness to “cast ballots.”

Voter turnout of overseas Koreans was 71.2 percent for this year’s presidential election and the number of registered absentee voters topped the 1-million mark for the first time this year. This also boosted the turnout.

Some observers said the Internet and social networking services also played a crucial role in encouraging young voters to head to the polls. Some observers expected young voters’ participation in the election to help the progressive candidate Moon Jae-in. 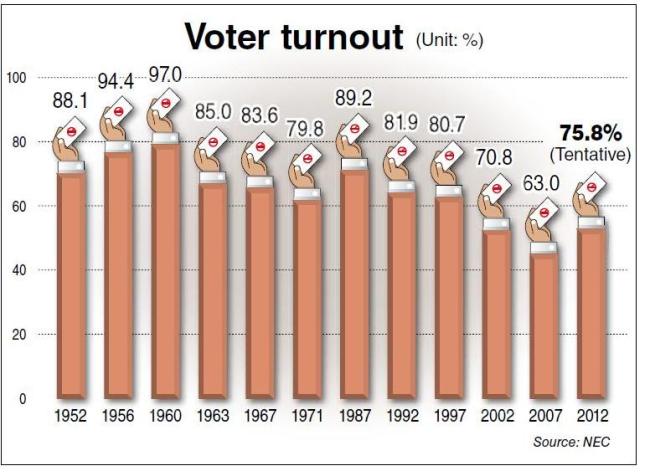