Debate over her sheltered past ― interwoven with some extraordinary rumors and scandals ― was offset by her resolve to lead the country and vow to be the cleanest president, without a family to turn to or debts to repay.

The divisive evaluations of her father’s iron-fisted rule only caused her campaign to wobble if anything, and she pulled through the attacks of the progressives with her coalition of conservatives.

They moved to Shindang-dong, Seoul, in 1958 during which Park recalls she led a normal life. She was considered by her teachers to be humble and diligent. 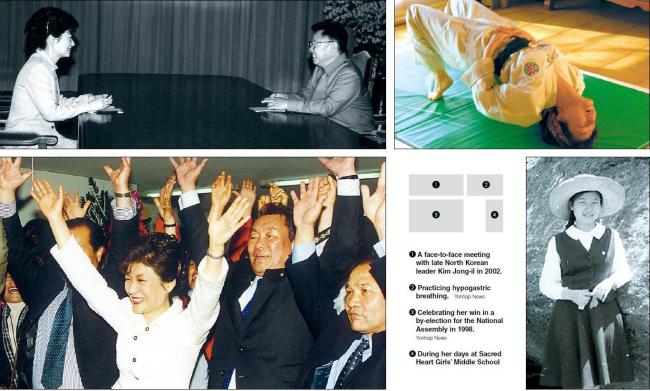 Her life changed in 1961, when her father led the May 16 military coup d’tat, consequently becoming the military junta leader for two years, and was named the fifth president in 1963.

The family moved into Cheong Wa Dae. She described her life in Cheong Wa Dae in her book as suffocating, saying that for her and her siblings, the spacious garden was their best playground.

In her memoir, Park does not hide her profound love and respect for her parents, both of whom would later be assassinated.

Park takes time to defend her father’s love for the country, which rapidly rose from the ruins of the Korean War (1950-1953) to become a vital industrial nation through inflows of foreign investment and ambitious economic reconstruction projects. Fighting poverty and building state power was her father’s ultimate vision for the country, albeit at the cost of normalizing relations with Japan (1965) against vehement protest, which later spread to uprisings by the democratic fighters against the Yushin Constitution in the 1970s.

Tragedy struck Park when she was studying in France in 1974, after graduating from Sogang University with a major in electronic engineering. Her mother was assassinated by pro-North Korean Moon Se-kwang.

At the age of 22, Park became the country’s acting first lady, accompanying her father on various events, greeting diplomatic delegations, and continuing the medical service campaign started by her mother.

It was during this time that Park was introduced to late pastor Choi Tae-min, whom she described as a person she was grateful for having when he consoled her over the loss of her mother. Choi, who reportedly underwent seven name changes and six marriages, worked with Park on various movements and organizations including in the Yookyoung Foundation. Her opponents continue to claim she had an inappropriate relationship with Choi, who died in 1994.

Park also had uncomfortable relations with her siblings in the years after Park Chung-hee was assassinated by his intelligence chief on Oct. 27, 1979.

Geun-ryeong and Ji-man reportedly requested in a letter to then-President Roh Tae-woo in 1990 to “save their sister” from Choi, who they accused of being deceitful. Park’s relations with her sister deteriorated in particular as they fought over the operation rights of Yookyoung Foundation in the 1990s.

For 18 years between 1979 and 1997, Park stayed away from the spotlight, describing the period as a “long and lonely journey.” She recalls it was during this time that she experienced the viciousness of politics as she witnessed some of her father’s closest aides become turncoats.

As criticism of her father and his rule hit full stride during the Fifth Republic (1981-1988), Park spent most of her time working at foundations left by her parents, including the Youngnam University Foundation and Yookyoung Foundation. Between 1994 and 2005, she headed the board of the Jeongsu Scholarship Foundation that would later return to bite her. Opponents continue to claim Park still has control over the controversial organization that was partly built with assets forcibly taken by Park Chung-hee from a corrupt businessman in exchange for leniency.

Political circles began to take notice and started suggesting she join them as she reached her 40s.

But it was not until 1997 that Park decided to enter politics after seeing the nation falter upon the foreign exchange crisis.

Park began her political career by supporting then-presidential candidate Lee Hoi-chang of the Grand National Party, the precursor to the Saenuri Party, and successfully ran in the by-election for a parliamentary seat representing Dalseong of Daegu the next year.

Her political career rapidly progressed. She became the party’s vice president for two years in 1998, and served in various committees at the National Assembly including those on industry, women, unification, foreign affairs and science and technology.

Park began to raise her political presence in 2002, criticizing the party’s one-man system under then-chairman Lee Hoi-chang ahead of the presidential election, and demanding the introduction of an open primary for the party.

As the fissure deepened, Park eventually left the party briefly with her followers and launched her own, which consequently raised speculation that Park may have long-term goals in mind, namely the presidency.

The same year, Park was also invited by Kim Jong-il to North Korea. Some observers have suggested the meeting between the two may show that Park holds a nonconventional vision on inter-Korean relations compared to her conservative party.

During the three-day visit, Park reportedly received courteous treatment. She described Kim’s style of speech and attitude as impressive.

Park rejoined the GNP a month before the presidential election, citing the party’s acceptance of her demands for reform.

But the GNP was defeated in the election when progressive President Roh Moo-hyun assumed office and the right-wing party suffered a major setback upon the prosecution’s full-fledged probe into its illegal political funds, as well as the backfired move to impeach Roh.

As the party turned to her for help, Park seized the chance to prove her leadership, moving the party’s headquarters into a tent and pledging political reform.

Her efforts appeared to have paid off as Park successfully helped her party win 121 seats in the general elections in 2004, earning the nickname “election queen.” Until she stepped down as chief in 2006, the GNP won in all elections.

On May 31, 2006, she was attacked by an assailant with a razor during a campaign rally, which left her with an 11-centimeter gash on her chin. She would later go on to use the incident for her first television advertisement as a turning point in her life.

Backed by solid partisan clout, Park made her first presidential bid in 2007 but lost to then-candidate Lee Myung-bak in the primaries.

With an ambition beyond prime minister, Park declined Lee’s later proposal for the post and instead went her own way. The fissure between Park and Lee further widened after the so-called pro-Park members were excluded from the 2008 general elections nomination list, leading to a mass defection of some 14 members who launched the “Pro-Park Alliance.”

Park continued to distance herself from Lee, and their separation peaked in 2009 and 2010 over the government’s move to revise the Sejong City administrative relocation.

In 2011, the GNP suffered a major setback by being defeated by independent candidate Park Won-soon for the post of Seoul mayor. Adding fuel to the fire was a series of gaffes involving the party’s key members leading to a resignation by the leadership including chairman Hong Joon-pyo just months before the crucial April general elections.

The party once again turned to Park for help, and she became the head of an emergency committee and changed the party’s name to the Saenuri Party, meaning “new frontier.” Under Park’s leadership the party highlighted political reform and won an unexpected victory against the Democratic United Party by securing a majority 152 seats.

Park made her widely anticipated presidential bid soon after but faced internal strife over her competitors’ demand for a fully open primary.

Park stuck through her original position to maintain the current rules, causing the other two, Reps. Chung Mong-joon and Lee Jae-oh, to drop out of the primary completely.

While her obstinacy was criticized by her opponents, her former rivals later returned to help out with her campaign against the liberal rival Rep. Moon Jae-in of the DUP.

In her campaign, Park faced growing demands by opponents to clarify her position on the oppressive rule of her father. With difficulty, Park held a news conference on Sept. 24 and apologized publicly for the first time for her father’s rule.

“In the shadows of South Korea’s rapid growth there was pain, suffering and irregularities as well as various human rights abuses committed by authorities,” Park said.

During her campaign, Park also suffered a loss of one of her close associates of 15 years, Lee Choon-sang, who died in a car crash during a regional rally just weeks before the election.