He sharply criticized ruling and opposition candidates for their negative campaigns while sidelining his political reform agenda.

“At the press conference for my withdrawal on Nov. 23, I said that I would sacrifice for administration change, and support unified candidate Moon,” Ahn said.

“I trust the supporters who built the hope for administration change alongside me will accept my will.” 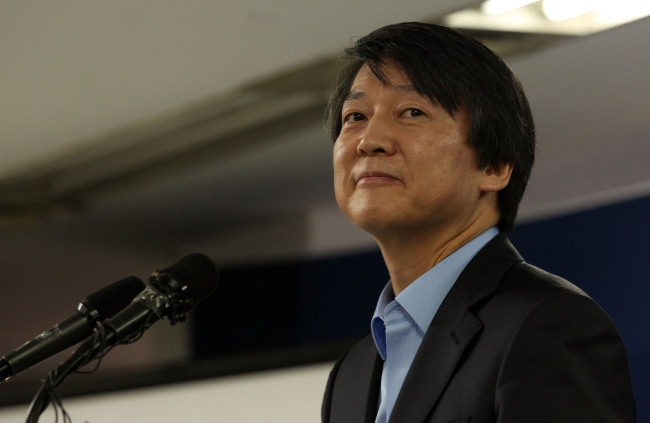 His campaign office formally disbanded 11 days after quitting the race on Nov. 23.

On Nov. 23, Ahn quit the race after the negotiations with the Democratic United Party’s Moon Jae-in to form a coalition fell apart.

Since then he remained away from the spotlight saying only that he would decide “not from the point of view of an individual, but from that of the supporters” in conducting his affairs.

Ahn’s support, however, did not come free of criticism for mainstream politics.

Criticizing the remaining candidates for engaging in negative propaganda and dredging up the past, Ahn said that the election was going in the opposite direction to the political reform craved by the public.

The event also appeared to double as the launch pad for his political career.

“The camp is disbanded today. However, today’s parting is not the end, but a new beginning,” Ahn said.

“I, Ahn Cheol-soo will train myself more. No hardship will be able to crush my will to be with you.”

Moon’s public relations chief Rep. Woo Sang-ho welcomed his remarks. “The public will not forget Ahn Cheol-soo, and the moving journey undertaken by all those concerned. In particular, (I) thank Ahn for the comment ‘support Moon for new politics and administration change,’” he said.

“Candidate Moon and his camp will work to open the horizons of new politics with Ahn, and it will be repaid with a change of administration.”

While the DUP focused on Ahn’s ambiguous support for Moon, the Saenuri Party picked up on the former candidate’s criticism against negative propaganda, turning it into an attack against the opposition party.

“Saenuri Party and Park have tried to make the election an arena for competition of vision and policy despite the DUP’s negative attacks,” Saenuri Party said in a statement. The statement went onto say that the issues Ahn singled out ― social integration, political reform and preparing for economic crises ― have always been on its agenda.

“The DUP and Moon, who have been obsessing over the past, should restrain from negative campaigning and roll out good policies that take care of the public.”

Moon and the Saenuri Party’s Park Geun-hye focused on preparing for the first televised debate among the three party candidates scheduled for Tuesday. Along with the two main candidates, Lee Jung-hee of the leftwing minority United Progressive Party will go head-to-head in the first of the three televised debates.

For Park, the debate comes as her lead over Moon is at its biggest in recent weeks, making it a vital opportunity to further extend her advantage. 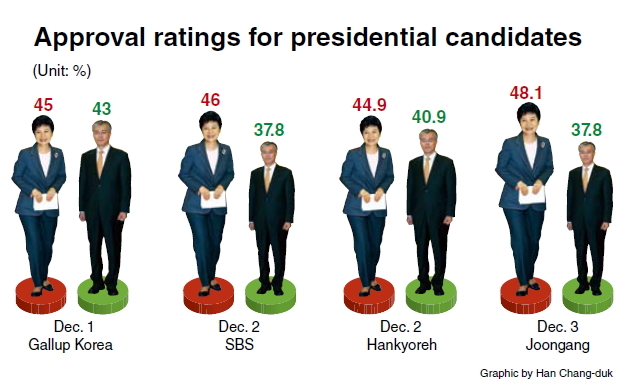 Although Moon and Park were shown to be neck and neck in recent weeks, the latest polls have placed the Saenuri candidate as much as 10 percentage points ahead. The largest gap was seen in the poll conducted by the daily Joongang Ilbo, which gave Park a 10.3 percentage point lead.

However, polls show that the gap is likely to be significantly narrower or even turn in favor of Moon with Ahn’s support.

As such, the conservative candidate spent all Monday preparing for the debate.

With the debate set to focus on preventing corruption, inter-Korean policies, foreign policy concerning neighboring countries, the conservative camp expects Park to be able to take the lead.

For his part, Moon set aside most of the day to preparing for the debate, attending only two campaign events in Seoul.

The DUP candidate’s strategy for the debate is said to be centered on showing his knowledge and experience in running state affairs. In addition, Moon is considered likely to ground his arguments on political reform issues and the joint declaration with Ahn to lead the discussions on the issue, as well as to appeal to undecided supporters of the former independent candidate.