The survey by Realmeter and commissioned by Herald Corp. also showed that political reform and economic growth are among the most important issues for voters.

The survey polled 1,000 eligible voters from Nov. 26-27 through an automated telephone survey and has a 95 percent confidence level with a margin of error of 3.1 percentage points. 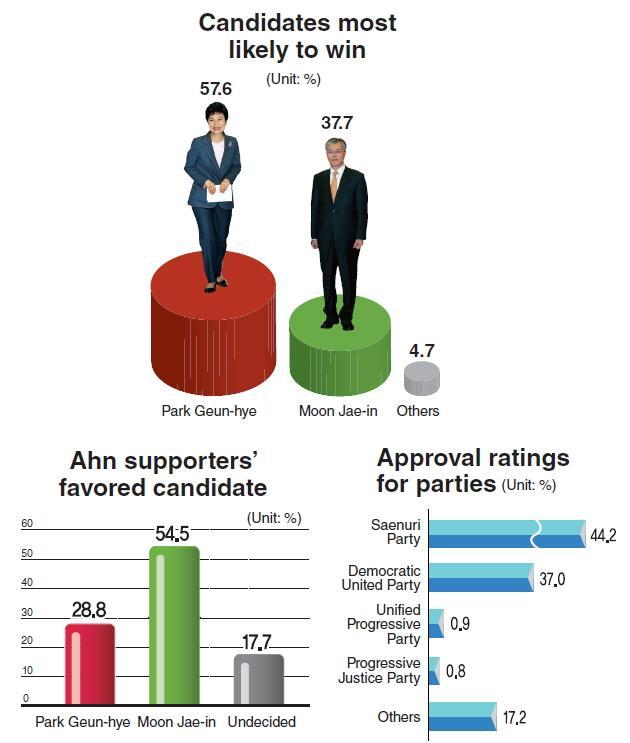 When asked to identify the main characteristic of this year’s election, 43.2 percent and 42.2 percent of voters in their 20s and 30s, respectively, identified the ideological battle between liberals and conservatives. Among those in their 40s, 38.6 percent of them also identified the ideological battle as the dominant characteristic of this year’s election.

But among voters in their 60s, 32.5 percent associated this year’s presidential election with the figures strongly linked to the two main candidates: the late President Park Chung-hee, the father of Saenuri Party candidate Park Geun-hye, and late President Roh Moo-hyun, whom Democratic United Party nominee Moon Jae-in served as presidential chief of staff.

Among liberal voters, only 8.9 percent perceived the race this way. But 32.6 percent of conservative voters indeed saw this year’s candidates as representing the two former presidents, while a slightly higher number of 38.0 percent saw it as the battle between conservatives and liberals.

In a question asking what variable might shake up this year’s race, 19.5 percent of the voters identified economic expansion as the second most likely such variable, closely followed by economic democratization, with 18.9 percent. The number one variable was political reform, with 27.2 percent. 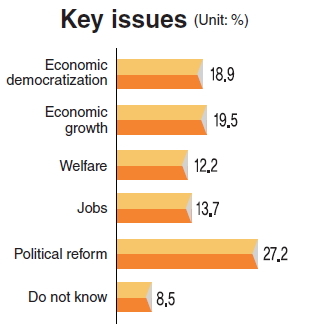 In spite of the ratcheted up rhetoric for economic democratization across the political aisle, voters seemed to still prefer expanding the pie rather than dividing it up. Below economic expansion and democratization, 13.7 percent and 12.2 percent of the voters identified job creation and welfare reforms as the most pressing issue.

Similarly, the portion of voters who identified welfare reform ahead of other issues among Park supporters was 11.9 percent and Moon supporters 12.8 percent.