Many voters indifferent to ballot: poll 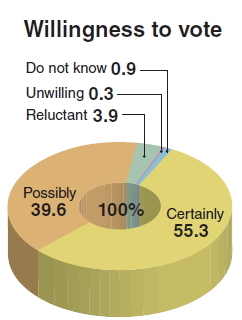 With the presidential election becoming a close race between two leading candidates, the Saenuri Party’s Park Geun-hye and Democratic United Party’s Moon Jae-in, voter turnout has emerged as a crucial variable to sway the final result on Dec. 19.

The people, however, are less willing than ever to practice their voting rights as they face a choice between two familiar faces engaging in negative campaigning after popular political reform crusader Ahn Cheol-soo withdrew from the scene last week.

In a public poll conducted by Realmeter commissioned by Herald Corp., only 55.3 percent of the respondents pledged to vote, down 16.9 percent from 2007.

The telephone survey, involving 1,000 eligible voters on Nov. 26-27, has a confidence level of 95 percent and a margin of error of 3.1 percentage points

Also, the figure in South Gyeongsang Province, Busan and Ulsan, was the highest (64.8 percent) whereas figures in Jeju, Chungcheong and Seoul all remained under 50 percent.

The supporters of the main opposition Democratic United Party were more enthusiastic than those of the ruling conservative Saenuri Party, with 61.5 percent over 55.8 percent.

Experts, however, predicted the actual turnout would be lower than the poll figures.

In a similar survey conducted before the 17th presidential election, 72.2 percent of the respondents said that they would vote but only 63 percent participated in the end.

“The number of determined voters, along with that of swing voters, may once again fluctuate, if Ahn steps out and confirms his support for Moon,” said Lee Taek-soo, the director of Realmeter.