The volume of the global carbon emission trading market -― a market where companies or individuals buy carbon credit to lower their total CO2 emissions ― reached $176 billion last year, 16 times greater than in 2005 when the Kyoto Protocol went into effect.

The Kyoto Protocol is an international treaty under the U.N. that set binding obligations on industrialized countries to reduce their emissions of greenhouse gases to prevent climate change. 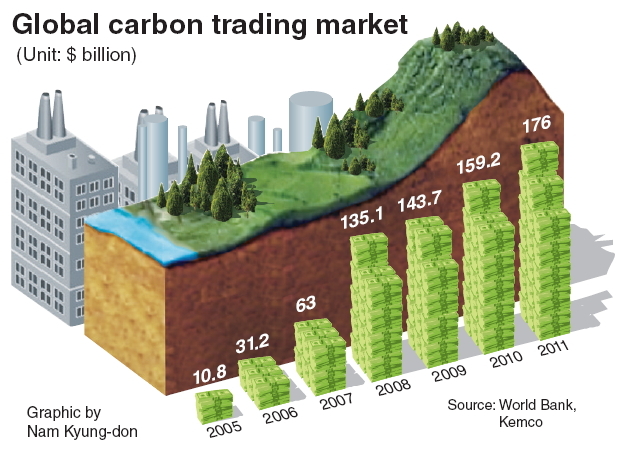 Other experts have forecast that carbon may become the next major currency.

The carbon market has grown more than 30 percent since 2008, despite slowdowns from the ongoing eurozone economic crisis. The EU carbon markets are the biggest in the world, worth $148 billion to account for about 80 percent of the global market.

Around 10 billion tons of carbon was traded worldwide last year. This was about 17 times the greenhouse gas levels emitted by Korea in 2009.

Korea, as the world’s ninth-largest carbon emitter, is also making headway on opening a carbon trading market. The government previously volunteered to reduce emissions by 30 percent of business-as-usual levels by 2020, meaning it will be cutting gas emissions based on a future gas prediction model. By 2015, the government plans to deploy the carbon trading system.

Currently, Seoul is working together with the corporate sector to set goals for reducing greenhouse gases and energy consumption. Fines are slapped on those failing to meet the target.

Korean firms have been complying with government and global regulations for climate change, but not without complaint: Despite them considering carbon restriction necessary, it hits their bottom line.