About 60 parents were recently summoned by prosecutors on suspicion of acquiring forged documents to enroll their children in a special international school in Korea.

They are said to have paid some 50 million won ($45,000) to brokers in Latin American countries including Guatemala to obtain fake citizenship certificates and passports.

Under the current law, only children who have lived overseas for more than three years or have a parent with foreign citizenship are entitled to study at the foreign schools.

A couple of students from elite families, including a relative of Prime Minister Kim Hwang-sik and a lawyer from one of the country’s largest law firms Kim & Chang, are also involved in the case.

There are currently 49 foreign schools across the country. But as of 2011, more than one-third of the 13,093 enrolled students were Korean nationals, according to data released by the Ministry of Education, Science and Technology.

Koreans should not exceed 30 percent of those enrolled. But reports showed that roughly a quarter of them have higher proportions of Korean nationals and some had Korean students making up more than 80 percent.

The problem is not only the number of Korean students, but also the extremely high tuition and basic fees.

An opposition lawmaker reported last week that tuition for the schools averages at 19.6 million won ($17,600) a year, rising to a maximum of 24.6 million won ($22,100), nearly 13 times higher than the tuition rates at state high schools. 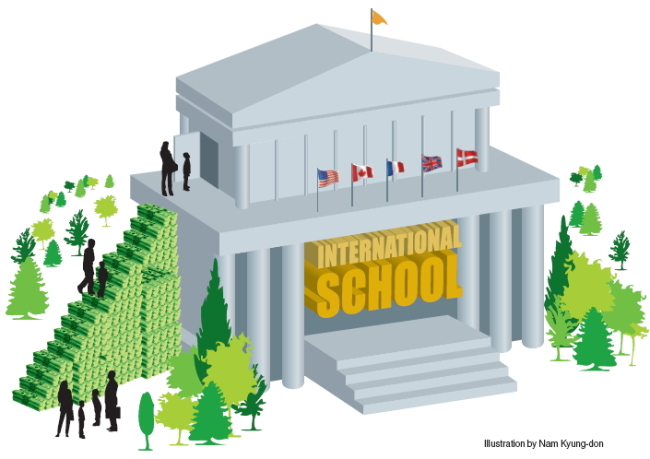 For instance, in order to attend the foreign school in Suwon in Gyeonggi Province, students have to pay some $17,680 in tuition fees a year, with optional $10,130 for their accommodation fees and some $215 for school bus services, according to Rep. Lee Yong-sup of the Democratic United Party.

He also pointed out that the Gyeonggi Suwon International School, which was established in 2006, received 10 billion won ($8.9 million) in funding from the Gyeonggi Provincial Government, and was given over 3,300 square meters of property to use free of charge by Suwon City.

The authorities, however, have never conducted a financial audit into the use of the money since there is still no such a rule and requirement for the school, according to Lee.

“The problem is the authorities don’t know where the money goes as they have never examined the schools’ accounts,” Lee said during the parliamentary inspection of the Education Ministry last week.

Observers say very high salaries of the teachers may be attributed to the comparatively high tuition fees charged at those schools.

But the main reason behind the high tuition fees is parents’ belief that the foreign schools might help their children go to better universities.

“I’d send my kid there if I could afford it,” said Park Ji-young, a mother of an 8-year-old.

“I think the tuition fees do not really matter, if you think about all the private lessons students receive, nearly 80 percent of my kid’s class pay at least 500,000 won ($450) a month to get private English lessons,” she added.

Most international schools use an English-based curriculum with a focus on sending their students to top foreign universities such as Harvard and Stanford University, according to an employer from a foreign school in Seoul.

“I think parents want to send their child to an international school because here you get the same education as you would overseas,” he told The Korea Herald.

And, in spite of “all that money,” parents want to enroll their children because they think the schools have a more personalized learning atmosphere, with better student-to-teacher ratios, he added.

Another reason behind the recent boom in the schools is that the authorities have eased regulations on the establishment and operation of foreign schools.

The government first granted permission to schools for foreign nationalities in 1999, and later eased the rules, allowing them to accept Korean students who have lived abroad for a of minimum three years in the previous five years.

Initially, only foreigners were permitted to set up foreign schools here, but the government later allowed Korean foundations to set up the schools.

The revised law also allowed the graduates of foreign schools to directly apply for colleges and universities here.

Last year, the Seoul Metropolitan Government held a public bidding to select the operator of Gaepo Foreign School, which will be constructed on more than 16,000 square-meters of property in Gangnam in Seoul.

The school, which will include kindergarten, elementary, middle and high school programs, will have over 800 students, according to the local government.

But the project has been halted after the assessment committee, comprised of the heads of foreign communities and the city council members, refused to select an operator.

Kim Houng-tae, a member of Seoul Metropolitan Council, said the school has considerable freedom regarding curricula, hiring of staff and accounting.

“Currently, the authorities have only the right to approve or deny license agreements with foreign schools,” Kim told The Korea Herald.

He added that the schools are not subject to the council’s monitoring as they generally do not fall under the Elementary and Secondary Education Act, nor the Private School Act.

“There are 22 such foreign schools in Seoul, but they are all exempt from an annual inspection from the city’s office of education,” he added.

But the Ministry of Education, Science and Technology said the schools are still under strict scrutiny regarding the admission of students.

“We also have a right to audit their accounts and inspect their facilities,” an official from the ministry told The Korea Herald.

The problem, however, is there are no detailed instructions, nor responsible personnel for overseeing the foreign schools, according to the official.

“One official from the education office is in charge of 22 schools in Seoul,” he added, admitting that up until recently the majority of foreign schools had never been under close oversight by the provincial offices.

“I think the recent admission-scam is just the tip of the iceberg since literally we don’t know what’s going on in there,” Kim said, adding that there is an urgent need for systemic reform regarding the guidance of these schools.

“It’s time to take some action against them,” he added.