Why go through the trouble of navigating the Internet to look up your favorite news sites when you can see all the news you want at once on Naver?

That’s a question being asked by many in Korea ― officially the world’s most wired country ― who surf the Internet in search of the day’s news. People who don’t have the time or patience to visit the individual websites and want everything at the same place, at once, fast.

Naver does just that, even giving users the benefit of the so-called newscast, which is essentially a window that groups together the main piece of news from each media company ― usually in the form of sensational news likely to “hook” the audience.

It would be safe to say that the Korean media is growing reliant ― perhaps too reliant ― on Naver for traffic for its online editions. 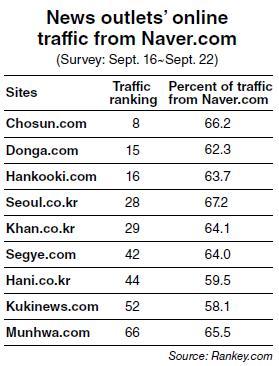 A recent study by Rankey.com, a portal specializing in the analysis and ranking of websites, showed that up to two-thirds of the total traffic for the nation’s top newspapers and online news portals came from Naver.com.

Rankey’s study was conducted on 11 top newspapers in Korea that are featured in the Naver newscast.

For the nation’s top five Internet news portals, an average 66.6 percent of their traffic came via Naver.

Daum, another popular portal that features news content, also is responsible for a large part of the user traffic at media websites; Naver has affiliated ties with 270 media companies, while Daum has up to 600, according to the Korea Advertisers’ Association. These “clients” no doubt include the nation’s leading newspapers.

Users may welcome this bit of news as it’s an indication that can readily receive one-stop news services via Naver or Daum, but it’s a double-edged sword as it also means viewers may not get a chance to pick through the news, but rather, are “fed” whatever news the media and Naver decide as the headlines.

Furthermore, viewers may be deprived of a chance to get a balanced view of what’s happening since on the newscast, only the most sensational and dramatic news gets coverage.

“It’s a classic problem of over-supply,” said Kim Young-wook, head of the Korea Press Foundation’s research center. “The consumers, including Naver, can afford to be pickier and choose what they want or don’t want, which leads to the problem of media outlets doing everything they can to try and increase their coverage amid the heavy supply.”

He suggested for media companies to combine forces to develop a new model for increasing or managing online traffic, but forecast that it would be very difficult to do so.

“The media companies will have to stick together and make things work, but due to their conflicting interests, it will be an incredible challenge.”

The New York Times is just about the only media outlet in the world, Kim said, that independently operates its website, mainly because its supply is in constant demand and viewers are eager to open their wallets to purchase the online content.

“But The New York Times is a very, very unique model,” Kim said. “If the Korean media had wanted to set up a similar operation, it should have done so when there weren’t as many outlets and the public was happy to seek out the services of the few well-known newspapers and broadcasters. Then media companies would have had a chance to hold onto these customers and make them pay for select content, but the market has frankly become too big to even consider such a solution.”

The dominance of portals like Naver and Daum is not all good news for the corporate sector, either.

As they are apt to sign on with any and all media outlets capable of producing news that can generate traffic, the line between decent media and ruthless tabloid becomes fuzzy.

Companies and advertisers have been pounded mercilessly by the latter group of media that spew out fantastically spun tales about them ― many of them groundless.

Due to the groundless stories pouring out from the latter group of media, companies and advertisers have grown increasingly wary of news featured on Naver or Daum.

The Korea Advertisers Association has gone as far as to designate some of the tabloids as “bad media.”

Companies complain that the tabloids are based purely on sensationalism and have one goal in mind: to gain any kind of coverage they can and generate revenue in any way possible.

Advertisers recently decided to form a portal exclusively to post objections to stories they consider to be intentionally damaging or incorrect.

But experts ask whether this will be enough.

With portals dominating more and more aspects of people’s lives ― up to 35 percent of online shopping mall users were found to be depending on Naver to log on to their favorite shops as of August this year according to Rankey.com ― both the media and the corporate sector will need a fundamental solution to protect themselves and keep offering quality content to consumers.