Kim’s agency announced that the infamous Hollywood socialite will appear on the music video of the title song of Kim’s 10th album, which will be released on Oct. 4.

“Kim was considering other Hollywood stars such as Jessica Alba and Scarlett Johansson along with Hilton, but decided to cast Hilton when the polls in Korea showed that Hilton was the most widely recognized Hollywood celebrity among Koreans,” said the agency. 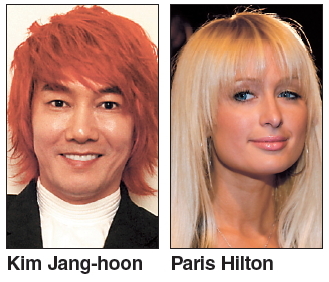 The music video will be filmed on Malibu beaches and in downtown L.A. on Aug. 23-25, and will be made into both 2-D and 3-D versions.

The agency said around 15 billion won ($13.3 million) will be spent on producing and marketing the video. “A talented production team in Hollywood will work as staff for the video,” Kim’s agency in the U.S. said. “I believe we will produce the best music video in Korean history.”

The singer left for the U.S. on Wednesday to film his latest music video. On Aug. 26, he will visit New York to check on the preparation for his upcoming concert in November.