North Korea on Monday announced that it had dismissed its military’s General Staff Chief Ri Yong-ho from all official posts due to illness, sparking speculation over a possible military power struggle.

The dismissal of a leading military figure could be a prelude to another reshuffle of top brass that would help the fledging leader Kim Jong-un further tighten his grip on the 1.19-million-strong military, experts said.

A Seoul government official said that it is “very unusual” to dismiss a top military officer just because of illness, stressing that it is a significant development the South should carefully watch.

“Ri is one of the highest-ranking military officers. The North abruptly convened a session and decided to dismiss him not just from one or two positions, but from all,” the official told reporters.

“After the very strong measure, it put it on notice early in the morning. Based on our judgment of past cases, it is quite unreasonable and unusual.”

Ri’s standing has apparently declined amid the rise of Choe Ryong-hae, a longtime aide to the Kim dynasty who now heads the General Political Bureau, the powerful military organ under the direct control of the ruling party.

But the dismissal came as a surprise because Ri was believed to have played a central role in helping the inexperienced leader establish his foothold in the military since he was said to be tapped as successor to his father Kim Jong-il in early 2009.

Experts said that Ri might have resisted the civilian-turned-general Choe becoming the centerpiece of the military leadership.

“There appear to be signs of a power struggle. It is not that the North accepted his resignation, but dismissed him. The North would not have removed him from all crucial positions just because he’s sick,” said Hong Hyun-ik, a senior researcher at think tank Sejong Institute.

“The possibility is that the decision was made in order to get things straightened up amid some sort of rivalry between Ri and Choe.”

“Chances are high that Ri was sacked after he resisted Kim’s using Choe as a centerpiece of his efforts to control the military,” he said.

Following the dismissal, a generational change in the military is expected as Kim revs up efforts to consolidate his military power.

“It appears that the North is in the process of a generational change ― removing Ri and filling key military posts with relatively younger officers loyal to the young leader Kim,” said Koh Yoo-hwan, a North Korea expert at Dongguk University.

Ri came into the spotlight in September 2010 as he and the young Kim were given the newly-created post of the CMC vice chairman. The appointment was crucial as the commission emerged as the party’s key organ in charge of policy decisions concerning military affairs. 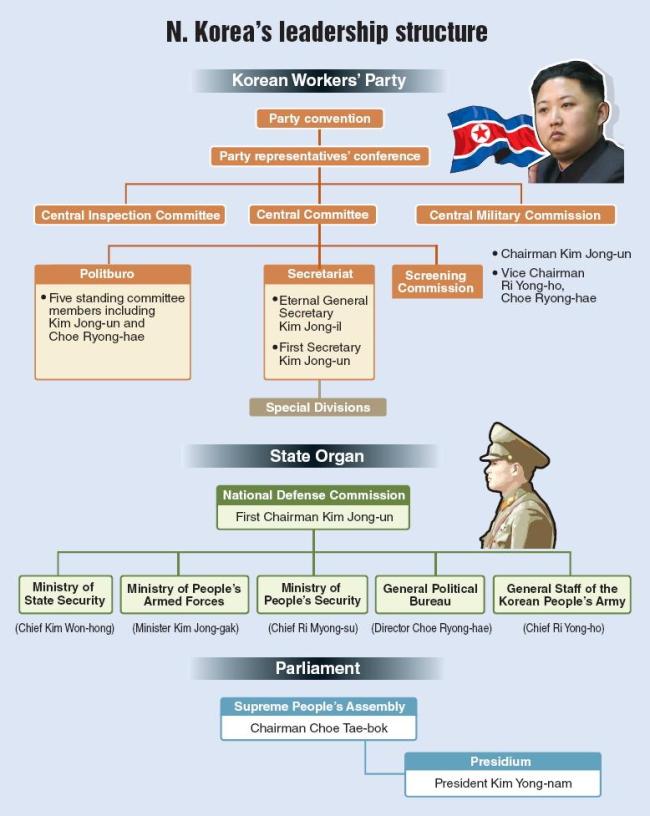 At the time, the late leader Kim strove to shore up the party’s role in controlling state affairs and systemize the governing structure for his 20-something son to effectively take the helm of the communist state after his demise.

Apparently concerned that his son might have difficulty quickly establishing an unrivaled leadership, the elder Kim sought to bequeath to him a more systematic power structure centering mainly on the ruling party.

Reaffirming his exalted status, Ri was among the eight top figures who escorted the hearse carrying Kim Jong-il’s coffin during the funeral ceremony on Dec. 28. Among them were the younger Kim and Jang Song-thaek, husband of the late leader’s younger sister Kim Kyong-hui.

Ri was also known to be a close associate of Kim’s powerful uncle Jang given that he and Jang attended the same Mangyongdae Revolutionary School, an exclusive institute for the children of the deceased contributors to the national founding.

Ri’s trajectory of success apparently faced a setback as Choe Ryong-hae emerged as a powerful military leader after he became the director of the General Political Bureau, regarded as the military’s second highest position, earlier this year.

Choe was the first civilian in decades to lead the influential organ. The bureau leads the crucial personnel management of other military bodies such as the North’s Ministry of People’s Armed Forces.

He rose up the political pecking order on the back of his father’s close ties with the Kim dynasty. His father Choe Hyon was a key member of the partisan guerrilla campaign against the Japanese colonialists in the 1930s, which was led by the communist state’s national founder Kim Il-sung.

Some experts said that the North’s claim of Ri’s illness is not cogent as Ri has continued to appear when Kim inspected military installations. Ri also stood on Kim’s left on July 8 when he paid tribute to his grandfather at the Geumsusan Memorial Palace on the occasion of the 18th anniversary of his death.

Some had differing views over the dismissal, saying that the decision appeared to be made due primarily to his poor health.

“It is a very risky decision to sack a leading military figure, particularly in the beginning stage of the new leadership, as without any clear justification, it could spark some unrest within the military,” said Chin Hee-gwan, unification professor at Inje University.

“Kim has recently focused on the livelihood of ordinary citizens as he visited a kindergarten and childcare center, while there was an apparently reduction in the number of his visits to military sites. This sort of suggests that he does not have much concern over military issues.”