Samsung Electronics, the world’s biggest chip and smartphone maker, is expected to post record earnings in the second quarter of this year.

The company estimated that its operating profit will reach about 6.7 trillion won ($5.9 billion) in the months between April and June, up about 79 percent from 3.75 trillion won a year ago. It is likely to post sales of approximately 47 trillion won, up 19 percent from 39.4 trillion won, according to the company’s pre-earnings guidance disclosed through a regulatory filing. The company did not issue its net profit estimation, or explanations for the figures. 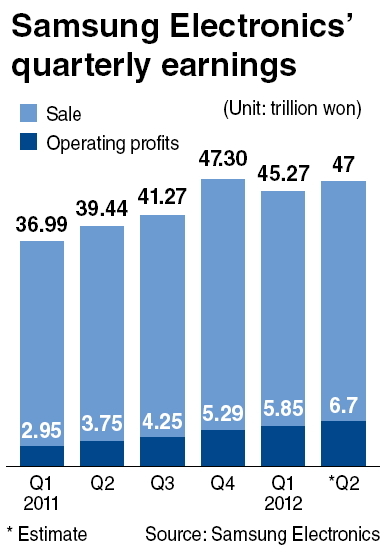 The tech giant, however, indicated during its first quarter results announcement that “solid earnings are to continue due to demand increase for set products and improved demand/supply conditions for the components (such as chips) amid seasonal pick-up.”

It noted then that demand will grow for smartphones, as well as for TV and digital appliances especially in emerging markets.

Although its second quarter sales performed below market expectations, Samsung Electronics’ operating profit outperformed the general consensus of 6.67 trillion won by analysts. The market consensus for sales was 49.97 trillion won, according to FnGuide, a financial information provider.

Analysts revised down their initial forecast of above 7 trillion won in operating profit early this month due to macroeconomic factors such as slowdowns in Europe, the U.S. and China.

“Samsung smartphones will take the lead in the global high-end mobile phone markets, which are expected to boost to its second quarter earnings,” said Kim Young-chan, an analyst at Shinhan Investment.

Its new flagship Galaxy S3 has a competitive advantage in the markets as Samsung’s close rival Apple delayed the release of its new smartphone.

The analyst expects Samsung’s Galaxy S3 to hit global sales of over 6 million phones in the second quarter, and 25 million in the second half of this year.

Samsung Electronics said that it will actively market both the Galaxy S3 and Galaxy Note Long Term Evolution smartphones in the second half in line with the 2012 London Olympics in which the tech giant is one of official sponsors.

In June, the company sold 650,000 Galaxy S3 smartphones, according to a press release.

Samsung Electronics smartphones accounted for a dominant 66 percent of domestic market shares in the first half of this year.