By Shin Hyon-hee
Published : Jun 12, 2012 - 19:17       Updated : Jun 12, 2012 - 19:53
South Korea will be exempted from U.S. sanctions on Iranian oil but concerns persist as ongoing talks with the EU over its upcoming ban on insurance for ships carrying the crude remain deadlocked, industry officials and analysts said Tuesday.

U.S. Secretary of State Hillary Clinton said Monday that Korea and six other economies will receive a 6-month waiver, citing a “significant” reduction in crude imports from the Middle Eastern country. The other recipients are India, Turkey, Taiwan, South Africa, Malaysia and Sri Lanka. 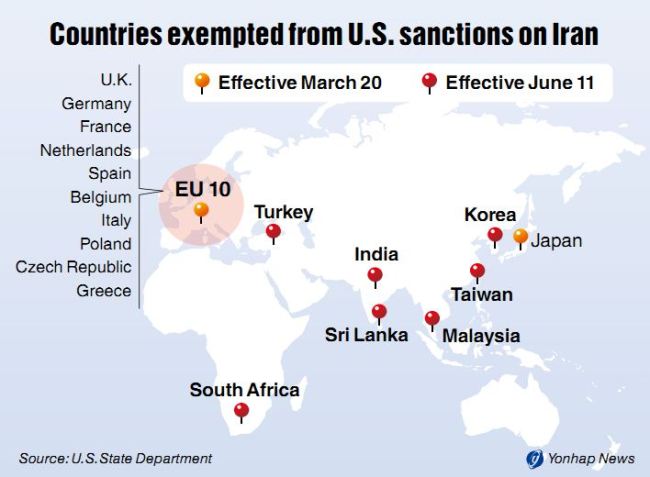 Washington and Europe have been pressuring Iran to relinquish its nuclear ambitions by severing transactions with the Iranian central bank and thus squeezing oil revenues, a key driver of the Iranian economy.

Tehran claims its programs are utterly for civilian purposes.

“By reducing Iran’s oil sales, we are sending a decisive message to Iran’s leaders: until they take concrete actions to satisfy the concerns of the international community, they will continue to face increasing isolation and pressure,” Clinton said in a statement.

“Our discussions are still under way with the EU as a whole and its members as well,” he told a press briefing on Tuesday.

A failure to secure a waiver will likely force Korean refiners to halt imports from one of its major crude suppliers unless they find an alternative source of insurance.

About 90 percent of the world’s tanker insurance is underwritten in the West. A supertanker carrying around 2 million barrels of oil would need $1 billion insurance coverage against personal injury and environmental liability, industry officials say.

“Ship insurance products have been developed around the globe based on the European standard and it’s not easy to find insurers elsewhere with the capability and scale we need,” an SK Energy spokesperson told The Korea Herald.

Korea is the world’s fifth-largest crude buyer and imports nearly all its oil needs.

To head off a supply crunch, Korea expanded imports from other Gulf and Southeast Asian countries and turned to non-conventional oil varieties from such regions as Latin America and the North Sea.

Shipments from Iran, in contrast, plummeted 28.4 percent on-year in the first quarter of 2012, according to LIG Investment & Securities, a brokerage in Seoul.

Amid public concerns over gas price hikes, Asian crude importers have called for state-guaranteed insurance coverage as Tokyo plans. But the Korean government remains hesitant in light of its ties with the U.S. and EU, as well as North Korean nuclear issues.

Foreign Ministry spokesman Cho said the government is "not considering state-level insurance at this point."

SK Energy, the country’s largest refiner, brings in 130,000 barrels of Iranian oil per day under a long-term deal. That translates into 10 percent of the company’s entire imports.

The Seoul-based firm has no immediate plan to cease imports from Iran and “devise various measures until the EU ban takes effect,” the spokesperson said.

Hyundai Oilbank, the No.4 refiner and the only other Iranian crude buyer here, has already stopped importing Iranian oil starting this month. It used to import 70,000 bpd, or 18 percent of the total.

Iranian crude is about $2 to $3 cheaper per barrel than that produced by other Gulf nations, an Oilbank spokesperson said.

“We’re hoping for state guarantees or non-European underwriters but we will have no supply problem for the time being,” she added.

Despite uncertainties, the looming sanctions will have limited impact on petrol prices in Korea, an LIG analyst Park Young-houn said.

U.S. officials estimate that Iran has lost around $10 billion in oil revenues this year. Exports by OPEC’s second-largest crude producer are projected to have plunged by up to 90 percent in May alone.

Dubai crude, Korea’s benchmark, edged up $2.15 a barrel to $98.66 in the Singapore spot market on Monday after the bailout of Spanish banks and increased imports by China. But that is far lower than $124 in late March.

The average pump price in Seoul has fallen to 2,049.07 won per liter after nearing 2,200 won in mid April, according to the state-run Korean National Oil Corp.

The 27-member EU is expected to decide on the recipients of waivers after talks between six global powers and Iran on Tehran’s atomic program in Moscow on June 18-19, and a meeting of foreign ministers on June 25. The six participants of the so-called P5+1 are the U.S., China, Russia, Germany, France and Britain.