Divorce in Korea is no longer unusual.

In the past wives who had long swallowed ill feelings against their abusive husbands would say to themselves: “I’ll endure in silence as I have done so far. How many days are left in my life?”

Now is an age in which some people can live 100 years and unlimited endurance in marriage is no longer accepted.

“In the old days, every wife endured. Nowadays, that’s not the case,” said a 76-year-old woman surnamed Park, who is seeking a divorce from her violent husband with the encouragement of her adult children. The number of women choosing divorce in their twilight years is surging. In Seoul, the divorce rate of couples aged 50 or older outstripped that of younger couples for the first time in 2010 and the gap grew wider last year. 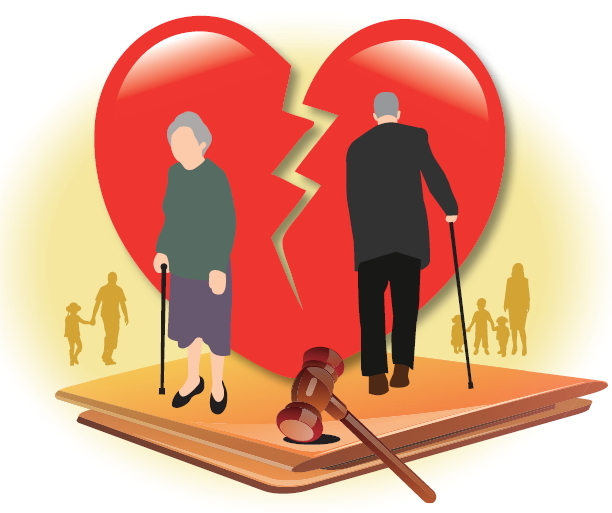 Portrait of an aged society

The divorce rate among older couples who have lived together more than 20 years shows little sign of abating. It is a self-portrait of Korea as it approaches the status of a super-aged society.

The proportion of senior couples who had lived together 20 years or longer before divorcing jumped from 7.6 percent in 1991 to 27.7 percent in 2011. That of younger couples married four years or less steadily decrease from 35.6 percent to 24.7 percent over the same period.

According to data released in 2010, the nationwide number of divorces for couples who had lived together for 20 years or longer was 28,300 in 2009. Senior couples also accounted for 22.8 percent of total divorces. Their proportion has been rising since 1999, though the number of old-age divorces declined from 2003 to 2005.

Divorce in the twilight era of life became a high-profile issue in Korea in 1999 after an elderly woman lost a divorce suit. In June 1998, Kim Chang-ja, then 75, won her first trial, as the court regarded her marriage as unsustainable because of her 83-year-old husband’s habitual violence and threatening obsession with her fidelity. The ruling was overturned in the second trial in January 1999.

The judge in the second trial highlighted her and her husband’s advanced ages and their lengthy marriage and ruled that the wife has the duty to care for and support her husband who is struggling with a mental disorder.

Soon the court came under a firestorm of criticism from women’s groups for turning a deaf ear to Kim, who they claimed was crying out for a decent life, even if she had only a short time left to live it.

The world has since changed and an increasing number of women have followed in her footsteps.

The center, with many branches across the country, had a total of 157,336 family counseling sessions in 2011. Its Seoul-based headquarters handled 11,073 of them, and divorce counseling took the lion’s share, with 5,177 cases.

As shown in the Seoul City divorce data, middle-aged couples and seniors in their 60s face marriage crises more frequently than the younger age brackets.

Notable is the tendency for more women than men to seek counseling on divorce among those 60 or older. Counselors said this reflects an overwhelming number of older women initiating divorce.

What is the biggest problem for marriages among those in their 40s?

The fact that financial troubles topped the list for those in their 40s reflects the tighter household economy, counselors say.

In cases of senior couples in their 60s and older, divorce consultations increased for both sexes. The number of older women who sought advice on divorce surged from 254 in 2010 to 402 in 2011, while that of old men went up from 57 to 122.

The case of a woman in her 60s, revealed by the center, shows what marriage troubles older couples are faced with.

“I have had a hard time due to my husband’s violence and abusive words since the early days of my marriage. All of my three children have grown up and gotten married. But his self-righteousness and verbal abuse have not changed a bit despite being in his 70s. Even if I am given just a day to live before I die, I want to live the day care-free,” the woman said.

Reasons for divorce frequently cited by those in their 60s or older were personality conflicts, economic matters, husbands’ violence and extramarital affairs.

“I have had financial difficulties because of my husband’s irresponsible life,” an anonymous woman in her 40s said to a counselor. “He had affairs with many women and whenever his infidelity was discovered, he and I lived in separate rooms. The other day I found out that he had cheated on me with a woman for as long as 10 years. When I confronted him about the woman, he stood by her and beat me.”

From 2000 to 2009, the proportion of those in their 50s or older among women seeking divorce expanded from 3.4 percent to 21.6 percent. Those in their 40s accounted for the majority of women who visited the center for counseling

The surge demonstrates that more women are pursuing a life on their own even if they are in their 50s or 60s. After marrying off their children, they are crying out, “I have endured enough,” counselors say.

“As Korea has become an aged society, the divorce rate among older couples has climbed. In a nutshell, wives’ long pent-up grudges break out,” said Park So-hyun of the center. “In cases of older couples, women are troubled more by a patriarchal culture than by economic matters.”

It is notable that both men and women focused on the economic inability of their spouses. Especially, the number of the men who cited their wives’ economic inability as the top reason behind a divorce increased from five to 14, though the numbers are still small compared with that of women, which rose from 119 to 162.

Experts say that the increase in men seeking divorce with housewives without jobs reflects marital conflicts stemming from those husbands who are early retired or whose businesses went bankrupt amid the economic downturn.

“Housewives feel humiliated to receive living expense money from husbands when their financial conflicts are getting serious. But they complain of difficulties finding jobs even with enough time left for their own after their children become grown-ups, because they are long discontinued from a social career,” a center counselor said.

If one spouse decides on divorce, procedures are not a matter limited to husband and wife any more. It turns into a legal matter.

Lawyers say that property division is an indispensable issue, especially in older couples’ divorces. Children are already adults and old enough not to be seriously affected by the divorce of parents. Given the children’s situation, wives who have had a long marriage can claim half of the property even if they were housewives, unless there are special conditions.

Pension division is a crucial issue, a divorce lawyer said, because pension is an important means of livelihood for the elderly, divorced or not.

“A family court recently ruled that not only the national pension, whose beneficiaries are mostly retired company employees, but also civil servants’ pensions are subject to property division in divorce cases. Rulings from appellate and supreme courts on pension division are expected to affect the divorce of older couples in the future,” said divorce lawyer Um Kyung-chun.

Most divorces of older couples are initiated by wives, but it is questionable that wives may seek divorce for property division, as some husbands argue. Adult children usually take the side of their mothers in divorce cases, pointing to abuse often suffered.

“Wives seem to ask for divorce in the evening of life after they have put off the decision for decades until their children grow up or get married,” he said.

“Nothing is more important for the happy life of elderly couples than settling ill feelings which have weighed on wives for a long time. Husbands should recognize wives’ pent-up grudges, remove their deep-rooted self-righteousness and embrace spouses so that they could live together happily until death parts them,” Park said.