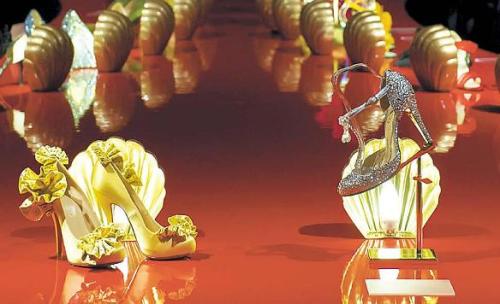 The exhibition at London’s Design Museum features dozens of the Frenchman’s creations, many of them displayed on a 17-metre (56-foot) version of the famous scarlet sole that features every Louboutin shoe.

Lashings of glitter, ruffles and feathers reflect Louboutin’s life-long fascination with showgirls, as does an enormous hologram of a glittering stiletto that turns into the sashaying image of burlesque star Dita von Teese. 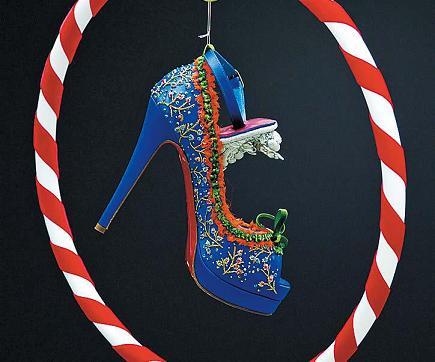 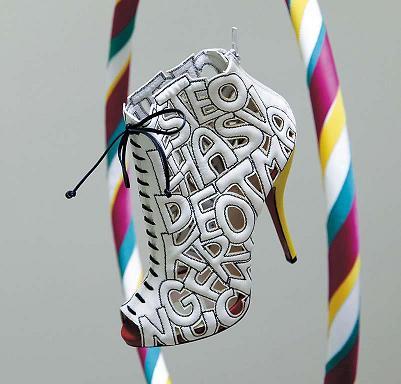 “I was brought up in a very feminine environment,” Louboutin told a press conference to launch the 10-week exhibition. “I had three sisters, I had a father who was barely there.”

As a result, the 49-year-old said, he grew up with “the biggest love and the biggest respect for women.”

But he admitted that his famously towering heels were not designed with comfort in mind.

“I am concerned by comfort and I know that it is important,” said Louboutin, clad in a simple brown and red checked jacket.

“But I do not wish to have that evoked in my designs. The idea of someone saying ‘Oh my God, how comfortable it looks...’” He shudders.

But recalling how Parisian showgirl friends would stuff their shoes with veal carpaccio to make them more comfortable, he conceded that “to suffer to be beautiful doesn’t work.”

“It doesn’t give you a nice smile,” he said. “The aim with his stilettos is to make them ”as comfortable as possible for that kind of shoe.“

The discomfort does not put off a host of celebrity fans including actress Gwyneth Paltrow and Victoria Beckham, fashion designer and wife of English football star David Beckham.

The exhibition takes visitors through the design process, from sketches to prototypes to the factory floor.

Louboutin’s witty designs, some of which are displayed with magnifying glasses to allow closer examination, include shoes featuring miniature Marie Antoinette-style wigs, and stilettos made entirely from plastic googly eyes.

A mock-up of his Paris workshop, complete with scattered shoes and sketches, features the trapeze from which he occasionally likes to dangle.

Another section highlights travel-inspired designs, including fur-lined platforms named after the Mongolian capital Ulan Bator and a pair of stilettos in Chinese silk.

Nell Trotter, a Louboutin communications manager, told AFP the brand was gaining a growing following in China since opening a branch in Beijing last year.

”We’re extremely popular in China, particularly since red is such a lucky colour over there,“ she said.

Louboutin is involved in a bitter legal wrangle with rival Yves Saint Laurent after the brand launched its own series with red soles.

The company launched a million-dollar suit against YSL in April last year claiming copyright infringement, but a New York court ruled in August that YSL could use the soles. Louboutin has appealed against the ruling.