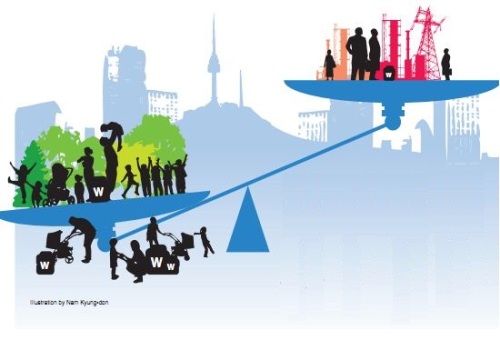 
Local governments’ financial problems are worsening due to increased welfare programs imposed by the central government and costly infrastructure projects.

Some cash-strapped cities have been unable to pay staff salaries on time. In April, Incheon was a day late in paying allowances to employees. The city’s decision to reduce overtime allowances and halt bonuses to senior officials from May points further to its fiscal problems.

The city’s total debt is projected to surge to 3.18 trillion won ($2.82 billion) late this year, accounting for about 39.8 percent of its 2012 budget. Incheon suffered losses from Global Fair & Festival 2009, for which a monorail was built but had to be dismantled for safety reasons because of poor construction. The city also started construction of a new stadium for the 2014 Asian Games, rather than upgrading and using an existing soccer stadium. 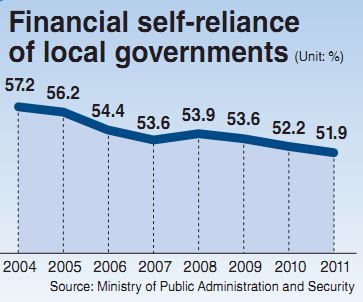 To make matters worse, free nursery care for infants 2 years old and younger began in April, adding to local governments’ load. The National Assembly passed the related bill late last year. At that time, politicians pushed for welfare expansion with the apparent intent of wooing voters ahead of general elections, despite concerns about budget deficits.

Responsibility for funding the scheme is to be shared by central and local governments. To squeeze their share out of the budget, local governments had no choice but to slash other spending.

It is estimated that local governments across the country will need a total of 342.2 billion won a year to provide free nursery care. The figure is likely to rise. The estimate only accounts for those infants currently at child care centers, but the prospect of free provision is likely to increase demand.

On March 29, metropolitan city mayors and provincial governors voiced their complaints about welfare expansion. They said they could no longer handle welfare increases, as the resources they have to support them are expected to run out in June. They called for the central government to pay the full cost of nursery care, arguing that it has passed the buck on funding.

The free nursery care program requires the central government to secure 369.7 billion won and local governments to add a total of 342.2 billion won to their welfare budgets.

Incheon Metropolitan City faces a nursery care bill of 27.3 billion won. The central government is supposed to contribute 60 percent of this, the city 28 percent and district offices 12 percent.

To secure the cash, the municipality is downsizing a project to build an administrative town in Dohwa. The town was planned to accommodate about 1,000 civil servants, but this has been scaled down to a complex for about 200 staff.

“Though the administrative town project was scaled down, the city seeks to attract a college, an art museum and other facilities to develop the old district,” a city official said.

The municipality has pushed to build Robot Land in the Cheongna Area within the Incheon Free Economic Zone by 2014, but recently changed its plans. It has decided to open some facilities as scheduled, including a robotics institute, but delayed the construction of for-profit facilities including a theme park.

The project adjustment was a result of the ongoing real estate market woes.

“We adjusted the Robot Land project in 2010 due to the slump in real estate, which is a major source of revenue for the city,” another official said. “We are trying to secure private-sector investment to implement the project in stages.”

The real estate downturn poured cold water on preparations for the 2014 Asian Games in Incheon. Incheon Mayor Song Young-gil said in a radio interview on April 12 that the slump had led the city to scrap the plan to construct an athletes’ village. The city will rent existing housing instead.

“At first, the city sought to build Asian Games facilities without central government support, as the property market in Incheon was very lively at that time,” Song said. He has since requested state support for the construction of the main stadium.

Gyeonggi Province has earmarked 3.86 trillion won for welfare this year, up 400 billion from last year. But as the free nursery bill passed the parliament late last year, the provincial government has to draw up an additional budget. To secure funds, the city may have to cut infrastructure spending.

Its welfare budget increased 11 percent from 3.6 trillion last year to 4 trillion this year, but tax revenue as of late March was 1.223 trillion, about 33.3 billion less than expected. The Gyeonggi government submitted its supplementary budget to the council Tuesday.

Even with this supplementary budget, Gyeonggi Province had to cancel construction of 16 roads because of lack of money.

“An expanded welfare budget, together with declining real estate-related tax revenue, has left the government with little choice but to reduce social overhead costs,” Ahn Gyeong-yeop, a budget official of the provincial government, said.

The province is scheduled to draw up a second supplementary budget in September, but doubts it will set aside funds for road construction unless tax revenue should surge.

The province appears to have little room to sell more debt, as interest from 1.7 trillion in local bonds reaches 50 billion annually.

“We have already issued 200 billion won worth of local bonds for stream and road construction, but the amount is still insufficient,” the official said.

Concern rising in other provinces 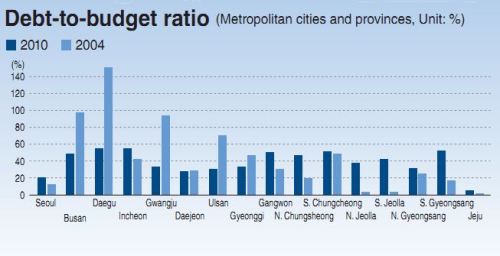 According to an analysis of debt-to-budget ratios by a local business daily on April 22, the figures of the eight local governments topped 40 percent in 2010. Daegu and Incheon metropolitan cities marked 57.77 and 56.7 percent, respectively.

Yongin City in Gyeonggi Province said on April 19 that it had signed a memorandum of understanding with Bombardier Transportation Korea on a change of business structure for its light rail line. The railway will now begin operation in April 2013.

Total private investment costs will be calculated by international arbitration, and Bombardier Transportation Korea will run the system for three years.

The city expects its 30-year fiscal support for the system to decrease from about 3.4 trillion under the minimum revenue guarantee to 1.8 trillion won.

The light rail system was completed at a cost of more than 1 trillion won in June 2010, but conflicts between the city and the builder have delayed operation. In September, an international arbitration ruled that Yongin should pay Bombardier 515.9 billion won, but the figure was beyond the city’s means.
The city got approval on April 12 to issue 442 billion won in local bonds. The amount was in addition to its local bond ceiling of 73.3 billion. As a result, Yongin was able to issue a total of 515.3 billion won in local bonds.

To pay back the debt, the city had to cut costs. It has been required by the central government to scale down or suspend large projects, sell unneeded assets and cut its payroll.

Learning process and focus on infants

A researcher of the Governors’ Association of Korea, which seeks to advance balanced regional development, blamed the legal restrictions on local governments’ freedom for the difficulties.

“From a legal point of view, local administrations have no say to reject central government projects that require them to share their financial burden,” Kim Hong-whan, research fellow of policy and research, said.

He suggested that the central government decrease the scale of state-funded projects that local governments have to share the cost of.

“As yet, there seems to be no definitive correct answer as to whether central or local governments should pick up the bill for welfare expansion,” said Kim Hyun-a, fellow of the Korea Institute of Public Finance.

“Both sides are in the process of improving the efficiency of public finance between central and local governments. The two sides may have realized that they have to get together to discuss how to fund increased welfare.”

She cited the prolonged real-estate downturn as the main culprit for local governments’ financial problems.

“Local governments need to expand their own projects to generate revenue, while cutting corners, as welfare programs are expected to continue to increase.

“It is difficult to scale down welfare programs once they are expanded, so central and local governments will have to examine their budgets and the demand for welfare closely before implementing them.”

A social welfare expert called attention to the welfare of infants.

“In pushing welfare programs for infants, the authorities need to examine whether bringing kids up at nurseries not at home with mothers is good for children’s development,” Jung Sun-wook, social welfare professor of Duksung Women’s University, said.

“The period from birth to age 2 is when a child’s attachment to his or her mother deepens.”

Society should take into account the interests of the beneficiaries ― the children ― in debating welfare problems, though public finance is an important matter, she said.

“When it comes to welfare issues, sufficient debate on policy goals to follow should come first, though it takes time, and then it would be possible to achieve the desired effects of welfare programs,” Jung said.