Saenuri underdogs line up against Park


A multitude of Saenuri Party members are declaring their bids for the presidential nomination, upping the ante against frontrunner Park Geun-hye.

The members openly criticized the chairwoman in the process, zeroing in on Park’s refusal to replace the party nomination system with an open primary. 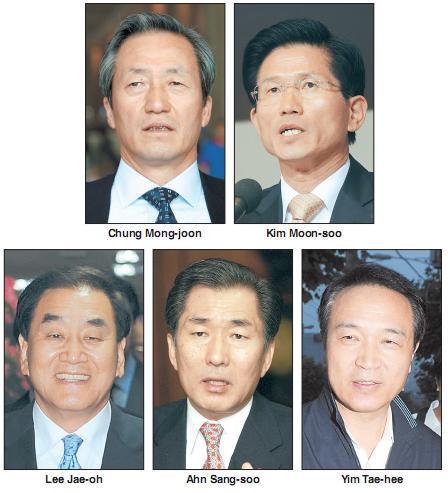 “The (one-person dictatorship) reached its peak through the April 11 general elections’ nomination process, and (she) still is conceited enough to stick to her way without harmonizing and integrating (the party),” said Lee Jae-oh in an interview with Hankyoreh on Monday. Lee Jae-oh is also expected to throw his hat into the ring around May 10.

Yim agreed to the need for changing the nomination process.

“The primary rule must change appropriately to allow more candidates with potentials to participate,” he said.

Discomfort with Park has been evident in the ruling party since the chairwoman took the helm of the party’s emergency committee last December and bulldozed through the nominations for the 19th general elections, dropping many senior members loyal to the president along the way.

The challenge against Park is likely to become more crowded as other potential contenders to join the nomination contest include former Incheon Mayor Ahn Sang-soo, who plans to announce his bid on May 6. Former Prime Minister Chung Un-chan is also a notable candidate, although there are views that he might join the presidential race as an independent.

While the intensified offensives may hamper Park in her efforts to maintain her grip on the ruling party, the diversification of the race could be healthy for both Park and the party, observers said.

“It would not only be natural but advisable for the nomination race to pan out into a political competition. For Park personally, such internal offensives against her could act as a rite of passage for her in pursuing her presidential aspirations, while remaining the frontrunner as most analysts forecast,” said Yoon Pyung-joong, a politics professor at Hanshin University.

Billionaire and veteran politician Rep. Chung Mong-joon is set to be the first official preliminary candidate for the presidential race by submitting his candidacy to the National Election Commission on Tuesday. Chung announced his bid for Saenuri’s presidential nomination on Sunday, going all out against the current leadership led by the pro-Park faction.

“The democracy within the party has gone missing and the party has stepped back 10 years in time,” Chung said at a press conference.

Chung highlighted what he called Park’s shortfalls, saying she faced a dilemma over how to solve the party’s omnipotent power structure, devise welfare polices in tandem with economic growth, and break away from the superficial approach toward inter-Korean relations.

Chung also supported the fully open primary, in which the candidate would be decided by a vote by citizens. Park has been supporting the existing system, where 50 percent of the electoral college is party members. The votes by the electoral college take up 80 percent and opinion polls make up the remaining 20 percent in deciding the party’s presidential candidate.

Park, in the meantime, has mostly remained silent over the rising calls from her contenders, concentrating on her tour across the country instead.

Political watchers said it was also likely for the underdogs to form an alliance to go up against Park.